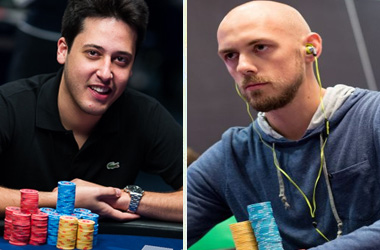 The Super High Roller Bowl 2018 is scheduled to take place from May 27 to 30 at the ARIA Las Vegas. The event saw a total of 61 players register for the $300,000 buy-in event. However, the organizers opened up only 48 seats to the event and due to the additional registrations a lottery system was set up to determine the final list of players who will be able to battle it out in the event.

The lottery was hosted by Ali Nejad, with ARIA’s Head of Poker Operations Sean McCormack, ARIA's Tournament Director Paul Campbell along with poker pros Daniel Negreanu and Phil Hellmuth, who both registered for the event.

The 61 names that registered via the site and sent in a down payment of $30,000 were put inside a tombola and out of the 30 names drawn, 11 players will be playing the event for the first time.

Included in these 11 names are recent headline makers Adrian Mateos, who took down the $5,300 partypoker Caribbean Poker Party MILLIONS Finale in Punta Cana in November 2017 and Stephen Chidwick who had a jaw-dropping cash run at the US Poker Open in February 2018. Although this will be the first time these two pros will be trying their skills at the Super High Roller Bowl, they will be aptly equipped since both players have been sharpening their high-roller game in various events recently.

Some of the top players who were not shortlisted include Fedor Holz, Tony G and Jake Schindler. The other players who did not make the shortlist will have their $30,000 deposit returned to them.

But they still have a chance to play in the event since ARIA will be seating 16 other players at the event. Two seats are also up for grabs during a $10,000 satellite event that will be held one day before the event.