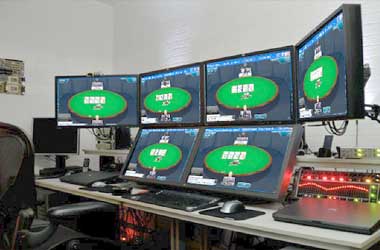 Footage of an Asian poker grind house with a group of players multi-tabling on the same poker app has been making the rounds on Twitter.

The person who took the video was speaking Mandarin, leading many to believe that the house maybe located somewhere in China.

The video was posted by Joey Ingram on his Twitter account, and has since gained more than 100,000 views. One user also shared a screenshot of a list of players whose account names are seemingly related to each other.

Commenters say the app in question was PPPoker, a major private club-based online poker platform, with users across more than 100 countries.

I've got a lot of questions about this poker grind house pic.twitter.com/HJRhdiiZSP

Last year, PPPoker made headlines when an unregulated, underground online poker club named Pokerclub.ag became the center of a Ponzi scheme controversy. The club was being promoted by Adnan “NYPokerKing” Mohammad, and was utilizing the PPPoker online software to run and facilitate games. Mohammad was accused of failing to pay players, with some being owed five figures.

PPPoker is booming in Asia, according to one of the commenters of the viral video. However, club-based apps operating in the continent over the past few years have always been hit with controversies and allegations of collusion, scams, and unpaid or stolen funds because of how they work. In order to play in these sites, you need to have an introduction via “middle men“, often called agents or hosts.

Sometimes these poker club based apps employ dirty tactics for their own personal benefit at the expense of unsuspecting players. They often hire a group of players using different account IDs to play in the same tournament, gaining illicit advantage over honest players. The grind house shown in the video could be one example.

Unlike the more credible and reputable sites, private club-based apps are more prone to these kinds of unscrupulous activity as the culprits always find an easy way out. As to the case of Mohamamad, he vehemently denied the accusations made against him and claimed he merely represented the club and was not involved in its inside operations.

What makes things worse is the apparent inaction of the apps or sites involved despite numerous complaints from players. One of the responses to the video suggested that it was actually an old footage and that apps are now improving their security to prevent similar instances.

Online poker has always been an attractive target for cheaters; that is why major online operators have continuously ramped up their efforts to make their platforms fairer, safer and more secure. The footage should serve as a lesson to players to just avoid dodgy sites to better protect their money.