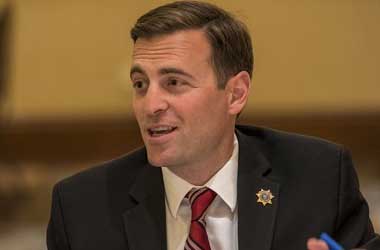 Nevada is one of the four states in America that has legalized online poker operations, the other three being Delaware, New Jersey and Pennsylvania.

However, Nevada’s online gambling legislation could be under threat if Attorney General wins the November election and becomes the new governor of Nevada.

Republican Gov. Sandoval’s term is coming to an end in November and he is no longer eligible to run for Governor. The Republicans have elected current Attorney General Adam Laxalt to be their representive for the November election and should he go on to win the election, it is quite possible that he will look to change the online gambling legislation and shutdown iGaming in Nevada.

AG Laxalt has been very open with his views concerning online gambling and does not believe that it should be legalized. Laxalt was one of the many attorney generals who signed the list to bring back the ‘Federal Wire Act’ which would ban online gambling. Laxalt has also endorsed a letter to the Trump government which calls on the Department of Justice (DoJ) to change its interpretation of the 2011 Wire Act.

The DoJ under the Obama Administration interpreted that the 2011 Wire Act could only be applied to sports betting and not online gambling. Laxalt has made it clear in the past that he is not in favour of having legalized iGaming in Nevada and it is quite possible that he will look to ban iGaming in Nevada – should he be elected as the state’s new Governor in November.

What is interesting to note is that the Chairman of the Las Vegas Sands Corp, Sheldon Adelson is the biggest political donor to Adam Laxalt’s campaign. Billionaire Adelson has personally funded the ‘Coalition to Stop Internet Gambling’ and is the biggest opponent against the legalization of online gambling.

Dan Schwartz, Nevada State Treasurer ran against Laxalt in the primary but ended up on the losing side. Schwartz alleged that Adelson is using Laxalt as his puppet to get online gambling removed in Nevada.