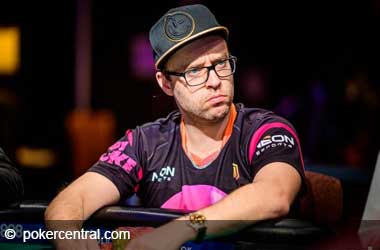 This comes just over three months after he was officially declared the 2019 World Series of Poker (WSOP) Player of the Year.

Campbell will now represent CoinPoker in live events across the world, alongside existing ambassadors Tony G and Isabelle Mercier. Campbell will make his first appearance as representative of the brand during the Bike Ride event on Sunday, February 16. He will carry a 0.25 BTC bounty, and will replace Tony G who previously played in these events. Campbell will join in on the action using the screen name “RobCampbell“.

CoinPoker was established with the goal of bringing back the fun and excitement in online poker. It is powered by blockchain technology that ensures quick, secure, and transparent transactions. The revolutionary platform supports Bitcoin and Ethereum and also uses its own cryptocurrency – CHP. The online poker site utilises a first-of-its-kind decentralised RNG system to provide players and fans with the best online poker experience.

The addition of Campbell to CoinPoker’s list of ambassadors will mark a new beginning for both parties, especially as Campbell’s own Dota2 gaming team Neon Esports will also be teaming up with the online poker platform. Campbell is also a professional esports player himself and also worked as a standup comedian prior to making it big in the poker arena.

Campbell has had an amazing 2019, having won two WSOP bracelets during the 50th year of the prestigious festival. He claimed his first bracelet after winning the $1,500 Limit 2-7 Lowball Triple Draw event where he also took home $144,027. Less than two weeks after, he took down the $10,000 Seven Card Stud Hi-Lo 8 or Better where he earned $385,763 as top prize, along with his second gold bracelet.

Campbell wrapped up the year in dramatic fashion after he was ultimately named WSOP Player of the Year, following a glitch in the tabulation of scores which saw Daniel Negreanu initially declared as the winner. The final standings placed Campbell at the top of the leaderboard, just less than 50 points ahead of second-placer Shaun Deeb.