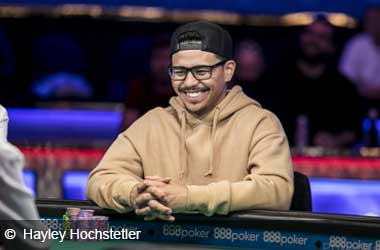 It took five long days for Event #50: Monster Stack – $1,500 No-Limit Hold’em to play down to a champion, and when the dust settled it was Kainalu McCue-Unciano who became the latest millionaire at the 2019 World Series of Poker (WSOP).

McCue-Unciano outlasted a huge field of 6,035 entries and defeated Vincent Chauve heads-up to capture his very first WSOP bracelet and a top prize of $1,008,850.

The Hawaiian player entered the tournament with nearly $500,000 in lifetime earnings, with $75,000 being his highest payout. While the action went on for 5 days, it was only during the last 24 hours that McCue-Unciano realized that he could become an overnight millionaire if he came out on top.

McCue-Unciano entered the final day second in chips with six players remaining. The action intensified early as the outright leader Benjamin Ector tried to run a monster triple-barrel bluff in the very first hand of play against Gregory Katayama who called the flop and hit a set of sixes on the turn. Katayama eventually secured the massive pot worth over 110 million, taking the lead and dropping Ector down to the second shortest stack.

With four players remaining, Bart Hanson was on the short stack and was not able to pick up any good hands. The poker pro and training site owner got all of his chips in the middle with ace-six against Katayama’s ace-jack. Hanson picked up a straight draw on the turn, but the river was no help for him so he ended up in fourth place, earning $344,079, the largest win of his career.

During three-handed play, McCue-Unciano and Katayama battled against each other in monster pots, with third in chips Chauve opting not to take part. McCue-Unciano eventually won the largest pot of the event by far, securing a massive lead as play progressed. Soon after, Katayama got involved in an all-in clash with jack-four against Chauve’s queen jack. Chauve made two pair and the curtain finally fell on Katayama who ended in third place for $461,369.

McCue-Unciano went into heads-up play against Chauve with a huge 8-to-1 advantage, but the latter managed to bounce back, eventually taking the lead. Both players alternately held the dominant position with many twists and turns until the final hand which saw McCue-Unciano shoving from the button with king-six suited against Chauve’s pocket tens. The Hawaiian player made a full house on the turn, leading him to victory. Chauve took home $623,211 for his runner-up finish.

McCue-Unciano was delighted with his win and was very proud to win a WSOP bracelet and take it back home to Hawaii.