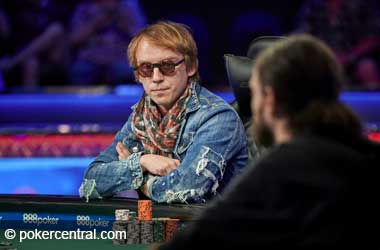 It is always a special feeling when you win your first World Series of Poker (WSOP) gold bracelet but it is extra special when you take down a special event.

That’s exactly what Roman Korenev did when he won the $2,620 No-Limit Hold’em Marathon event.>

The Russian pro took down the poker equivalent of the legendary 42.2-kilometer long-distance race following an epic heads-up battle against Minnesota’s Jared Koppel. The “Marathon” event took six full days to finish, and in the end Korenev was crowned the winner, outlasting 1,083 entries and capturing his first-ever gold bracelet, plus the top prize of $477,401.

The live-streamed final table saw six players battling it out for the lion’s share of the prize, with Koppel leading the chip count. The final action started with only five players as China’s Dong Sheng Peng only arrived around the 10th hand of the day. But there was no shortage of action though, as the opening hour lasted with a lot of all-ins.

The first casualty of the day was Joseph Liberta, who also came into Day 6 as among the short stacks. He left with $79,957. Not long after, Joe Curcio went all in with pocket aces. Francis Anderson called with Q10, flopping a pair of queens. He got two pair as the turn card was a ten, finishing off Curcio in fifth place for $108,646.

Anderson was the next to exit after his pocket nines didn’t hold up against Korenev’s pocket sixes with a six on the flop. Anderson earned $149,605 for his fourth place finish. Latecomer Peng saw his stack quickly drop and eventually shoved all in for 17 big blinds from the small blind with Kh8s; Korenev called with pocket kings and Peng was drawing thin. The latter failed to find help from the board and was eliminated in third place for $208,726. Within 90 minutes, the final table was down to just two players.

An arduous five-hour heads-up battle ensued between Korenev and Koppel with both players starting the action almost evenly placed. The chip lead switched between them in an exciting final showdown. After 12 double-ups, Korenev finally cornered Koppel when the latter flopped top pair with a straight draw on the 13th all-in of the battle. Korenev’s higher pair improved to two pair on the river and Koppel had to settle in second place for $295,008.

Korenev, whose total live earnings climbed to $2,203,373 after his first-place finish, was at a loss for words when victory unfolded right before his eyes. The Russian poker pro is keen on playing as many events as possible and has set his sight on a second WSOP bracelet.