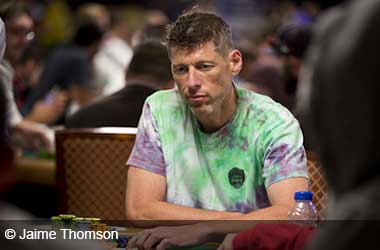 Huckleberry Seed has finally been inducted into the Poker Hall of Fame.

The four-time World Series of Poker (WSOP) bracelet winner has become the 59th individual to receive the honor, after getting the highest number of votes from the 31 living Poker Hall of Fame members.

The 10 finalists were announced following an open-nomination process wherein poker fans were given the chance to nominate their poker heroes based on the following criteria: they must be at least 40 years old at the time of nomination, played for high stakes and competed against acknowledged top competition, played consistently well, gained the respect of peers, and stood the test of time.

For nominees who are non-players, they must have made a lasting and positive impact on the world of poker and contributed to the overall growth and success of the game.

Majority of the players who made it to the 2020 shortlist were finalists from last year, including Antonio Esfandiari, Eli Elezra, Chris Ferguson, Mike Matusow and Ted Forrest. Seed himself was also nominated in 2019, and has been on the list for several years.

Seed follows in the footsteps of Chris Moneymaker and David Oppenheim, both of whom were inducted in 2019.

Seed, a California native, discovered his passion for poker when he was still in college. It was mainly for this reason that he decided to quit his studies altogether. He was taking up electrical engineering at California Institute of Technology back in 1989 when he took a leave of absence to play poker. He never returned. A year later, he earned his first tournament cash.

From there, Seed slowly made a name for himself in the live tournament arena. In 1994, he won his very first WSOP gold bracelet after winning a $2,500 Pot Limit Omaha tournament for $167,000. Just two years after, he captured his second bracelet, this time more remarkable, as he became the 1996 WSOP Main Event champion for $1,000,000, his biggest live score to date.

He then followed it up with two more WSOP victories which took place in 2000 and 2003. Over the course of his career, Seed has scored 40 WSOP cashes, which account for more than $3,000,000 of his lifetime tournament winnings. Apart from the WSOP, he’s also well-known for his impressive runs at the NBC Heads-Up Championship (he won the tournament in 2009).

Seed’s interest in prop bets also contributed to his massive popularity. He was involved in multiple crazy prop bets over the years, consistently putting him in the headlines.