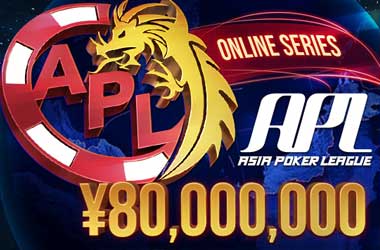 The poker industry is buzzing once again with live poker action picking up in the U.S. and U.K as well as other parts of the world. While it is great to see the live poker scene get back up and running again, there are still a number of exciting online poker tournaments taking place.

Not a lot of attention has been given to the Asia Poker League Series which is currently running on Natural8.

Natural8 had a lot of success when it decided to take its Asia Poker League Series (APL) online earlier this year.

As a result, Natural8 has gone ahead and launched a second online edition of the APLS which started on June 11 and is scheduled to finish on June 27.

While the Asia Poker League Series does sound like it is a tournament designed for Asian poker players, Natural8 has opened the APL to poker players from around the world. There is a lot at stake here as a total of CNY80 million is up for grabs which is just a little over $12 million in guaranteed prize money.

The APL also has a number of other exciting features included such as the special edition APL speed racers and 20 Jade Trophy events. To find out more about the online edition of the APL and learn more about the terms and conditions, do visit the Natural8 website.

More About The APL

The APL was launched back in 2016 by Judic Kim who is a games promoter from Korea. The APL started out as a live poker tour and its first tournament took place at the Beijing Poker Club (BPC). There was a great response at BPC as over 465 players signed up and nearly doubled in 2017 as 911 players registered.

The APL then started to move into different Asian countries such as the Philippines, Korea, Australia, Taiwan and Vietnam. The online edition of the APL has opened the tournament up to players from around the world.