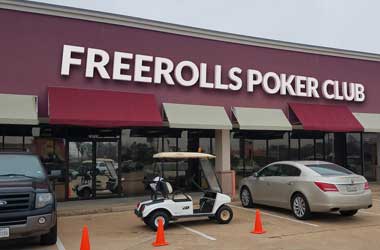 Poker clubs have long struggled to operate in Texas because of the state's gambling laws—but the FreeRolls Poker Club is going around this by introducing a brand new profitable concept to keep its poker room legally open.

There are three main conditions in Texas that allow poker games to be played:

Because of these strict regulations, many poker clubs have been forced to wind up operations or shut down due to police raids or lack of profits.

In response to the continuous growing demand for poker and the strict gambling laws, one Houston poker club called FreeRolls Poker Club has decided to change the way clubs are making profit to keep the business afloat and legal.

According to Trent Daniel, business development director of FreeRolls, their poker club is unique in the sense that they don't charge patrons anything else other than membership fees. This means their poker games have no rake, no seat charges, and no tips.

So how is the FreeRolls poker club earning money? Daniel says that their strategy is by running targeted and interactive ads and commercials on their poker tables. For him, the goal was to create a business model that did not take advantage of loopholes in the law.

With the help of Amazon Cloud services, they have so far booked 35 advertisers, and are expecting to grow this to 100 by September. They are also looking to launch profiles-based interactive ads in time for the World Poker Tour (WPT) Deepstack Houston Main Event with a $1,000 buy-in and $100,000 GTD running on the poker room from September 26 to October 2.

In a statement, Daniel said,

I totally flipped the current poker model from making money from members to making money because of the members. The real value in having a bunch of people sitting around our club for hours at a time was that they are a totally captive audience and that is how the idea of integrating ads into the tables came to be

Apart from running table ads, the newly passed JOBS Act by the Securities and Exchange Commissioned enabled FreeRolls to raise capital via public solicitation and crowdfunding portals. Daniel says that while investments through the crowdfunding is coming in through little amounts, the business model becomes more efficient and profitable as they expand to other locations around Texas or other states that hold strict gambling laws.

Right now, with all of these planned and laid out for FreeRolls, what Daniel wants is for anti-poker legislators like City Councilman Greg Travis to visit his club so they can show them the legality of their club, and how they're doing good by partnering with charity fundraisers like Texas Brotherhood Ride.