Debate Erupts Over Who Should Be The Real 2020 WSOP Main Event Champion November 20, 2020 Gabrielle Monet 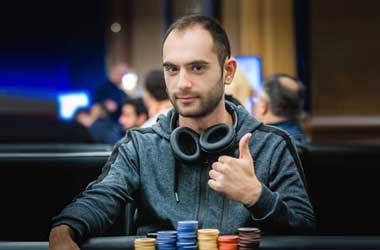 Madanzhiev also walked away with his first ever gold bracelet, alongside a letter confirming he was the 2020 WSOP Main Event winner.

However, following the announcement of a new online-live hybrid WSOP Main Event, Madanzhiev’s title has now become the subject of debate.

When organizers announced that a $10,000 buy-in Main Event will kick off on November 29, they also announced that the winner of the event would ultimately become the 2020 WSOP Main Event champion. So what happens to Madanzhiev’s title?

The Bulgarian poker pro expressed his sentiment this week on Twitter, claiming the players had fallen victims to misleading communication and marketing by the WSOP, as those who participated in the Online Main Event thought it was the official 2020 Main Event. According to him, even the commentators and those who prepared the certificate probably weren’t aware that another 2020 WSOP Main Event would take place.

Looking back, If I had known I wasn’t playing the “actual” world series of poker, I probably wouldn’t have reentered. Or maybe even played. It worked well for me but I wonder how many others fell for this false advertising trap? #wsop #scam
*interview for @CardPlayerMedia pic.twitter.com/85MyF1ivHF

Daniel Negreanu, who was among those who promoted the WSOP Online Main Event, sympathized with Madanzhiev and congratulated him for his epic victory, but the GGPoker Ambassador also reiterated that the WSOP did not consider it as a replacement for the $10K Main Event in Vegas.

He won the $5k reentry main event for the summer and millions of dollars! Congrats to him.

You can check, and I’m sure you will, I have always been consistent in every interview that this event wasn’t replacing the WSOP $10k freezeout main event.

But several members of the poker community think otherwise. One of them is Thomas Keeling, who said the announcers on the PokerGO and GG broadcast referred to the Online Main Event as the “championship” event. The poker player and video editor said Madanzhiev should be the official 2020 Main Event Champion.

The announcers on the PokerGO/GG official broadcast referred to it at the time as the championship event.

It's too late to rewrite history. Stoyan won fair and square, he is the 2020 Main Event Champion.https://t.co/Jp2jUO6KWP

Madanzhiev says what the WSOP management and organizers did to him was an injustice and said that they had let down all the other Online Main Event poker participants who were misled into believing they were taking part in the 2020 Main Event championship.

When asked whether or not he would participate in the online-live hybrid Main Event, the Bulgarian said he’s not quite sure, given the complicated travel he would have to go through as part of COVID-19 restrictions.

The live final table of the international leg of the 2020 Main Event will take place at King’s Resort in Rozvadov, Czech Republic. It would also be somewhat awkward to see Madanzhiev competing in the Main Event, as it would seem like he’s fighting for something he’s already won.