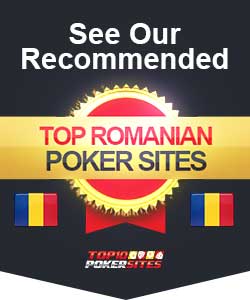 Romania is an Eastern European country wherein certain types of legal gambling activities are allowed. Depending on the circumstances of the event, poker may be allowed within the bounds of the law as well.

Most of the gambling in the country takes place in state-approved casinos. Unsurprisingly, most of these establishments are located in the capital, Bucharest. Here there are approximately eight gambling facilities, with 24 game tables between them.

The largest casino in Romania is located at the JW Marriott Bucharest Grand Hotel. The casino has 14 game tables and four tables devoted to poker.

It is interesting to note that poker was a largely underground activity in Romania as little as a decade ago. People that wanted to indulge in their favourite game either had to play behind closed doors at home or in clandestine locations, or play online and hope to remain undetected.

All that has changed however, as the country began to adopt a more tolerant policy toward poker and gambling in general. As more and more casinos and card rooms began to open up all over the country, so too did opportunities for Romanian poker players. While underground establishments continue to operate everywhere, there is no shortage of opportunities to play a host of casino games legally, include poker.

Is poker legal in Romania?

Poker may be deemed legal in Romania depending on how the law is interpreted.

Under Romanian law, skill-based and social games are not actively regulated because they do not fall under the definition of “gambling”.

Skill-based and society games are defined as those that do not involve the following:

Poker activities may therefore be engaged in legally if they conform to these definitions.

In addition, poker may be allowed if it is organized in order to encourage business, as long as they do not entail a participation fee or additional expenses for the participants.

Laws And Regulations In Romania

In Romania, the gambling industry is addressed by the following laws and regulations:

Government Emergency Ordinance 77 – Passed in 2009, this is known as the Games of Chance Law. This deals with the organization and operation of games of chance.

Government Decision 111 – Passed in 2016, the law sought approval of the Methodological Norms for implementation of Government Emergency Ordinance 77.

Government Emergency Ordinance 20 – Passed in 2013, this law pertains to the establishment, organization, and function of the National Gambling Office.

Government Decision 298 – Passed in 2013, this law addresses the organization and function of the National Gambling Office.

Order 47 – Passed in 2016, this is aimed at land-based slot machine operators.

Order 239 – Passed in 2015, this involves monthly statements of the revenues earned by land-based and online establishments.

The National Gambling Office is the primary regulatory body for gambling in Romania.

A department of the Romanian Government, it oversees a supervisory committee that is tasked with granting licenses to gambling operators.

This supervisory committee for its part has two executive members: a President and a Vice-President.

There are also seven non-executive members which are appointed by the Prime Minister and proposed by officials of the central administration.

Legal Age To Gamble In Romania

Under Romanian law, only those 18 years and older are allowed to enter and play in casinos and card rooms.

Romania was the site of the PokerStars caravan in 2017. Held from July 31 to August 6, the tour was the second time the event took place in the country.

Spring and summer 2017 was also an especially active time for the local poker circuit, with live poker festivals such as Grand 300 Bucharest, Israeli Poker Championship Bucharest, and PokerFest Iasi all having taken place.

Romanian Poker Players To Watch Out For

A number of excellent poker players have come from Romania over the past several years. Achieving renown in their native country as well as around the world, these players have made significant contributions to the uplifting of the game.

Perhaps the single most important player in Romanian poker, Born and raised in Canada to Romanian parents, Daniel Negreanu has won over $21 million throughout his career.

He has won the World Series of Poker bracelet six times, and has earned two World Poker Tour championship titles.

One of the most active players in the country, Manole has earned more than $2 million a tournament career that began in 2006. In his first foray into the international circuit, he came in 12th and made a modest $640.

He has since won in seven tournaments, among them the 2012 Dusk Till Dawn Caribbean Poker Party, the 2012 PokerFest, and the 2010 CAPT European Poker Championship.

In a career spanning just over five years from 2008 to 2013, Anton has played in no less than 14 major tournaments. He has earned a total of close to $2 million in live events, placing him second in the All Time Money List of Romania.

He came in third in the 2011 PokerStars Caribbean Adventure and second at the 2011 World Series of Poker, winning nearly $430,000.

Romanian players that wish to play poker online may make deposits and withdraw winnings via the following methods:

The local currency in Romania is the Leu. Local casinos and card rooms generally do not accept the Euro, although some online gambling establishments do accept it.

Those who wish to play poker in Romania can do so without fear of being in violation of any laws. There are many opportunities to do so in government-approved casinos and card rooms, as well as in online establishments.

FAQs when playing poker in the Romania

Is gambling allowed in Romania?

Gambling is allowed in Romania to some extent, subject to government regulation and control.

What is regulation like for the Romania gambling industry?

Skill-based games and society games are not subject to regulation under Romanian law, provided they conform to certain guidelines. They should not involve any type of material winnings for the players for starters, nor should they involve a participation fee. The results of these games should also not be dependent on random determination or selection. Games that meet these criteria are not considered gambling as such, and they can be played without regulation while still being within the bounds of the law.

Poker and other types of gambling games may be permitted as well if they are held in order to promote sales or business. However, the above restrictions still have to be met. Any poker game that conforms to these requirements may be allowed under Romanian law.

Are gambling winnings in Romania subject to taxes?

In land-based casinos, winnings earned from gambling are levied taxes by the organizers of the activity. In the case of online casinos, paying the appropriate taxes is the sole responsibility of the player. Taxes earned from online gambling are paid annually.

Where can you play poker in Romania?

There are casinos and card rooms all over Romania, with the most facilities located in Bucharest. The capital of the country, Bucharest has more than eight gambling facilities, which between them have 24 game tables and more than 600 slots and video poker machines.

Some of the online casinos that accept players from Romania are Unibet, Poker Stars, 888.com, and Public Win.