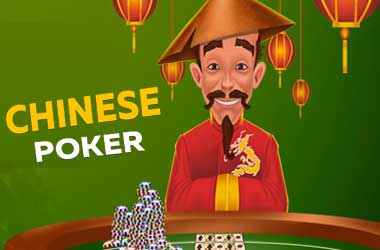 Chinese poker is a popular game usually played by poker aficionados who want to try something new. Technically, it isn’t a form of poker since there are no betting or chips involved. But it uses poker hands to determine the winner, so that’s how its name came to be.

If you’re looking for an all-in-one guide that could help learn everything about Chinese Poker, you’re in the right place.

Here’s a quick rundown of what you’re going to learn from this article:

On top of that, I’m also going to show you the best poker sites where you can hone your newly-found knowledge and, hopefully, make some cash from it.

Let’s get down to it, shall we?

While not as popular as other variants, Chinese poker is offered by numerous casino and poker sites. And if you want to test your skills, that’s where you should start.

Also, playing poker from the comfort of your home helps you play with a clearer and freer mind. Chinese poker is a fun game, and if you go online, you can have that fun anytime you want.

The poker sites I’ve listed on this page and above have been tested inside-out for trustworthiness and safety. These are all elite operators with a proven track record of serving poker aficionados with the best care possible.

According to some historical sources, Chinese poker was created over thousands of years ago — about the same time Pai Gow had been introduced.

Other findings indicate that Chinese laborers introduced Pai Gow to the US during the 19th century, where it merged with several forms of poker. Allegedly, this merging created Chinese poker. It seems that the origins of this fun-filled game may be lost to history, but who cares?

Chinese poker became an instant hit in 1995 when it was introduced to the World Series of Poker. Today, this poker variant has still not really taken over the world, but it’s popular among high rollers who want to try something new.

Each round of Chinese poker lasts approximately 20 minutes, depending on how many players are participating. Much like other poker variants, Chinese poker features several stages. Naturally, it all begins with card dealing.

The dealer deals 13 cards to all players, starting with the player sitting on his immediate left.

Each player arranges their cards according to the predetermined rule (see below). Bottom and middle sets (rows) contain five cards each, while the top row consists of three cards.

Once all the cards are arranged, players place their hands face down systematically on the table. First comes the bottom, then the middle, and then the top is lined up furthest away from the player.

Are you in or out?

Players (starting from the left of the dealer) announce whether they want to play or not, if they agree on the surrender rule.

Players then report their royalties, if they have any.

Revealing of the hands

Players flip their cards face-up, exposing all the three rows.

Points are distributed according to the pre-defined scoring system (see below).

The video below might help you learn the basics of Chinese poker.

Chinese poker is played on a standard deck of 52 cards and can accommodate a maximum of four players. Why only four? Because each of the four players is dealt 13 cards, and there would be no cards left for the fifth one.

Although the game can be played with two or three players as well, four hands of 13 cards are always dealt — all cards must be used.

The object of the game is to make three poker hands out of those 13 cards of the highest possible quality.

Here is an example hand — let’s suppose you get these 13 cards:

You can sort these cards in many ways, and one of the best would be:

As you can see, the top hand consists of only three cards, so the only possible combinations are reduced to a high card, a pair, and three of a kind.

Once all the cards are set, players compare each of their three hands (bottom, middle, top) with those of the opponents.

Regular Texas Hold’em showdown hand values are used for comparison. In the standard Chinese scoring system, you get one point for each winning hand. If your hand is equally strong with that of your opponent, nobody gets a point.

For example: If you beat your opponent in the top hand and the bottom hand, but lose in the middle hand, you win two points, and your opponent wins 1 point (2–1). If there is a tie, no one wins a point. If there are multiple tied hands, combinations 1–1, 1–0, and 2–0 are also possible.

There are various scoring systems in Chinese poker and the one thing they all have in common is that players exchange points with each other. This means that the sum of all points is always zero. How many points is each hand worth is up to debate.

Here are the most commonly used scoring systems in Chinese poker.

1–6 rule is the most popular scoring system where a player gets 3 additional points for “scooping” the round — winning all three hands. Therefore, a scoop will give you six points, whereas your opponent loses six points.

In this rule, if you win two hands and your opponent wins one, both of you get one point. This scoring system is the most exciting one because it rewards the aggressive style of play and usually spices up the game.

In 2–4 rule, a scoop is worth four points, while the opponent loses four points. If you win the round 2–1, you get two points, and your opponent loses two points. Those who utilize the 2–4 rule when playing Chinese poker tend to play a bit more passive.

Usually, you are not allowed to fold in Chinese poker. However, if you agree to play by the surrender rule, it is possible for a player to do it. If you surrender when playing with a 1–6 rule, it will cost you three points against each opponent.

In a nutshell, royalties are bonuses awarded to players with strong hands. The points per royalty can differ, depending on which Chinese poker variation you play. A player must declare his loyalties before revealing his hand.

Some combinations of hands or hands that are awarded royalties are:

Also, the number of points you are awarded for each royalty depends on the row. For the top row, royalties are worth:

For the middle row:

And lastly, the bottom row:

Naturals are a special type of royalties, based upon all the 13 cards falling into a “special hand” category. It should be noted that naturals are awarded before anyone can surrender and that the player who is dealt a natural will not play their hand.

But even if someone has a natural up their sleeve, others can keep playing the round without him. Here’s how much naturals are worth:

Although there are no foolproof strategies that could help win constantly in Chinese poker, there are some things you can do to improve your winning odds. Pay attention.

Unlike other poker variations, in Chinese poker, it is possible to gain an advantage with a proper strategy. You can do this by calculating all possible hands your opponents might be holding, and then creating a hand that scores as high as possible on average against all these hands.

Mathematics is the foundation of every strategy involved in every version of poker. This article emphasizes the significance of having good math skills when playing poker.

Adjust to Your Opponent

You can’t always rely on the math to do the job because there are just too many variables; it doesn’t take into account the style of play of your opponent.

For example, if your opponent neglects the top hand thinking that it’s the least important one, you’ll be able to exploit this by concentrating on the top hand a bit more. That way, you can score some easy points.

The strategy you should deploy heavily depends on the scoring system you’re using. A strong hand in the 1–6 system won’t give you as many points in the 2–4 system, and vice versa.

You would be surprised by how many “pro” players make basic mistakes by not placing their hands in the correct order. And if you play by the 1–6 rule, every mistake can make a vast difference to the final score.

Although this sounds a bit obvious to say, it should really be the foundation of your strategy when playing Chinese poker. Even if you get lousy cards, make sure that one of your hands is as strong as possible. That way, it will be hard for the opponent to get those three extra points.

On the other side of the coin, if you get good cards, try to maximize your chances of being the player that scoops someone else. It does feel good.

In Chinese poker, you’ll often get four pairs in your hand. You should always put your best pair in the middle, the 2nd best in the top, and the two “worst” pairs in the bottom. This gives you the best possible chance of scooping all three rows.

The luck element plays a much greater role in Chinese poker than in other poker variants. Often, all it takes to win is a basic knowledge of poker hands, and a kiss from the lady luck, making it much more appealing to beginners.

Be that as it may, you still need to develop some strategy to be successful. You can’t just jump in and rely entirely on luck, because this is not a winning strategy. Form a working strategy, and try to form the three rows of the highest quality as possible.

Don’t forget to arrange your rows according to the rules. Read the rules section a couple of times before you start playing for real cash. Avoid getting swept, even if that means that you need to surrender.

Finally, use a pen and paper to keep tabs of the units you have won or lost and to whom, that is, if you don’t play online.

If you need further clarification, feel free to leave a comment in the section below.

Are there any Chinese poker variations?

Yes, there several variations that derived from the original game. These include Open-Face Chinese poker, Criss Cross, Low in the Middle, 11-Point game, the Will.

Why does Chinese poker rely on luck?

Because there is no betting involved, which automatically negates the bluff factor. In Chinese poker, you can’t go with lousy hands and hope that your opponents will buy into your bluff.

Are there any Chinese poker tournaments?

Yes, there are! In fact, some of the sites from our page frequently host Chinese poker tournaments.

What is the difference between Open Face Chinese poker and the standard version?

There are a few differences, and the most notable one is seen in the dealing process. In OFCP, players receive five cards at the beginning of the round, whereas in the regular version, they are dealt with 13 cards at once.

Can I make money from playing Chinese poker?

Absolutely! You need a working strategy and a lot of luck, but it is possible to make money from playing Chinese poker.