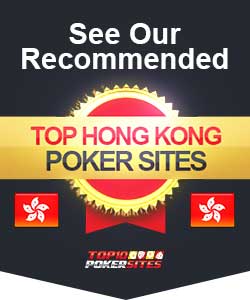 Hong Kong is an autonomous region that is officially a part of China, but which still has its own laws and governance. As far as poker and gambling are concerned therefore, Hong Kong should be considered distinct from mainland China. To be sure, Hong Kong does have its own laws and regulations pertaining to the gambling industry, which is actually allowed subject to certain restrictions.

It is estimated that more than 80% of Hong Kong’s adult population engages in some form of gambling. This is a pretty sizable percentage by most accounts, and suggests that there is a huge market for poker here.

One thing is for sure: even with the well-known restrictions on playing poker in land-based casinos and online poker rooms, there are definitely enough options for poker players to enjoy more than a few games if they have occasion to visit Hong Kong.

There was a time when Hong Kong had even fewer options for gambling available than today. In fact, prior to 1950, virtually all forms of gambling were illegal. It was beginning that year that the SAR government allowed the operation of mahjong parlors, and the game is still widely–and openly–played today.

Of course, some of the mahjong market has since given way to other forms of gambling, particularly among the young who saw such games as old-fashioned and ill-suited to modern tastes. Poker and other action-packed casinos games began to take hold, with card rooms and casinos cropping up all over. This continued on until 2010, when new regulations resulted in a renewed crackdown on gambling, and poker was once again pushed to the underground along with other casino games.

Is poker legal in Hong Kong?

Poker isn’t exactly illegal in Hong Kong, although you would be hard pressed to find a casino or card room where you can readily walk in and play. Live poker options tend to be fairly limited in the city, and many poker rooms have been shut down by the police.

There is the option to play poker in private homes and private gatherings, which are allowed by law huge sums of money do not typically change hands. A number of clubs in fact get around the restrictions by charging customers a flat “room rental” fee or a drinks minimum instead of a straight rake. In most cases, this seems to have had the effect of putting law enforcement at bay.

Because of the restrictions and the scarcity of live poker options in Hong Kong, many locals and even foreigners living in the city opt to play online instead. Again, the laws regarding online gambling in Hong Kong are pretty ambiguous, so you wouldn’t necessarily want to make your activities known to just anyone.

That being said, the Hong Kong government has been known to block transactions with online casinos and card rooms from people living in Hong Kong. You can get around these restrictions by using an e-wallet service or a prepaid cash vouchers, but it is always better to keep your online poker playing activities to yourself.

Laws And Regulations In Hong Kong

In Hong Kong, two laws apply to the gambling industry:

Poker exists in a sort of legal grey area, with policies leaning towards illegality. All other types of gambling are considered, and the penalties are pretty harsh. First convictions will result in a fine of HK$10,000 and a three month prison term. Get convicted a third time, and you face a HK$30000 fine and a prison term of up to nine months.

The primary regulatory body for the Hong Kong gambling industry is the SAR Government.

In order to be able to gamble in Hong Kong, you will have to be 18 years of age or older.

Poker tournaments can and do take place in Hong Kong. In fact, there is quite an active local scene which also serves a sort of training ground for up and coming players. Much of the activity is centered on the Hong Kong Poker Players Association (HKPPA), which holds to regular tournaments, also holds poker clinics.

The Hong Kong Game Club (HKGC) is also known to host poker tournaments, which are usually Texas Hold’ em specific events. Tournament events are typically held in different clubs all over Hong Kong, and winners receive prizes every night. Players collect points with every game and are included in the Hong Kong rankings.

Hong Kong Poker Players To Watch Out For

Some of the biggest and most successful names in Asian poker come from Hong Kong. Among the most famous are:

The top female poker pro in Hong Kong, Jay Tan had been looking forward to a promising future in banking before trading it all in for a career in poker.

Having made it to the finals table at the Aussie Millions event in 2013, she went on to win AU$150,000. This was her biggest cash win in a professional tournament.

“Kinglune” Lau was twice named the Asia Player of the Year, with 2017 being the second time he received the honour.

He is currently the only poker player from Hong Kong that has ever received that distinction.

“Sparrow” is a 2017 Guinness World Record holder for having the most “in the money” finishes within a calendar year.

He was given this honour after collecting earnings from 67 live tournaments.

Among the banking options available to online poker players from Hong Kong are:

Keep in mind that some online gambling establishments may not accept bank wire transfers and credit cards and debit cards issued from Hong Kong. Many local players therefore opt to use e-wallet services to fund their casino and card room accounts instead.

The official currency of Hong Kong is the Hong Kong dollar. Most casinos catering to the Hong Kong market will also accept US Dollars, British Pounds, and Euros.

Hong Kong isn’t exactly awash with opportunities for playing live poker, and the restriction on online gambling puts a damper on online poker activities as well. Even so, there are certainly opportunities for you to put in a game or two, particularly in the local tournaments that are regularly hosted in accordance with local laws and regulations. And with plans underway to enter into dialogs with the government for the relaxing of restrictions on real money games, it may not be long before many more opportunities to play poker can be found in Hong Kong.

FAQs when playing poker in the Hong Kong

How active is poker scene in Hong Kong?

The poker scene in Hong Kong is pretty active, although there tends to be more foreigners than locals. There are only a few officially-approved sites however, and playing in the underground establishments isn’t recommended unless you know someone that can show you around and ensure your safety.

Are there opportunities to play live poker in Hong Kong?

There aren’t many establishments wherein foreigners can freely play poker in Hong Kong, unless there are officially-sanctioned tournaments. However, these tend to cater to the big-name high rollers. There are underground establishments and private poker games held all over, but they aren’t ideally suited for walk-ins. If you do want to play at these places, it is best to have someone invite you and show you around. Even then, there is a risk of the game being shut down by law enforcement authorities.

Online poker in Hong Kong is a bit of a gray area in that it isn’t officially allowed. However, many local and foreign players seem to ignore the rules and go ahead and play in them anyway. If you do decide to take the risk, you do so at your own discretion. There are many online casinos and card rooms that accept players from Hong Kong, although you might find banking options fairly limited.

What are the banking options for online poker players from Hong Kong?

Your best option is to use an e-wallet service or a prepaid cash voucher. Many online casinos that are otherwise accepting of Hong Kong players will not accept credit cards and bank wire transfers from Hong Kong banks.