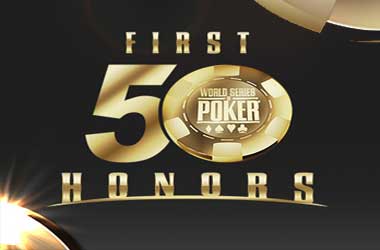 The 2019 edition of the World Series of Poker (WSOP) will truly be an event to remember. The world’s longest running festival will mark its 50th anniversary in celebrating the game of poker.

The 50th edition is extra special because the WSOP will be remembering the most poignant moments and honouring the most prominent names in WSOP history.

Allowing fans to have the final say on these matters makes this year’s festival all the more exciting.

Voting is now underway and will end on June 15, with the winners to be unveiled at a special dinner set on June 29. WSOP will also be giving away prizes to fans who send in their votes.

We take a look at the awards that are up for grabs and a list of the nominees:

Most Likely to Succeed

Other awards include Most Memorable WSOP TV Hand and Favourite WSOP Bad Boy. A special panel of poker media members will also choose the 50 greatest WSOP players of all time.

Prizes available for those who participate in the voting process include seats to Event #69: $1,000 Mini Main Event, an opportunity to take part in Event #88: $500 WSOP.com Online Summer Saver, alongside lots of WSOP merchandise as well as entry to the special dinner called “First 50 Honors” will be held at the Brasilia Room on June 29 at 8pm, which will be attended by gold bracelet winners and other select VIPs. Winners of these prizes will be determined through random drawing.