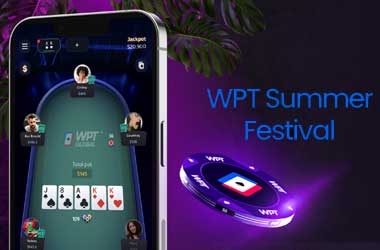 As the 2022 WSOP wraps up, players can now shift their attention to the virtual felts, as multiple online poker sites are running online festivals over the next few weeks, including WPT Global, the newest online poker room to join the market.

The WPT Summer Festival has just kicked off on WPT Global on July 20. The schedule includes 50 tournaments running through August 22, with more than $3.5 million in total guarantees up for grabs.

The action has just begun this week with The Opener, a multi-flight tournament that costs $220 to enter and comes with $150,000 in guaranteed prize money. It takes place on Wednesdays and Sundays until August 22 and players are allowed to enter as many flights as they wish. The tournament adopts a “Best Stack Forward” policy wherein players take their largest stack with them if they progress into Day 2 from multiple flights.

A micro version of the event is also added to the schedule which offers $10,000 in guarantees for a buy-in of only $2.

There are a lot more to be on the lookout for in the series, with some events featuring guarantees of up to seven figures, including the $1 for $1 million which runs every Wednesday and Sunday. As the tournament’s name suggests, players get the chance to compete for $1 million for a tiny investment of only $1.

There are a few tournaments for PLO fans as well, including the $220 buy-in, $150K GTD PLO Championship running daily from August 1-7, with a $110 buy-in, $100K GTD Short Deck Bounty Championship also taking place on the same dates.

If you’re into progressive bounties, you have to check out the $220 buy-in, $300K GTD Summer Progressive Bounties Championship which will run every day from August 8-14.

Of course, the main highlight of the festival is the Main Event which is scheduled for August 12-22 and comes with a $330 entry fee and a huge $1 million guarantee. If you can’t afford the buy-in, you may enter the $100K GTD Mini Main Event instead, which will only require you to spend $33.