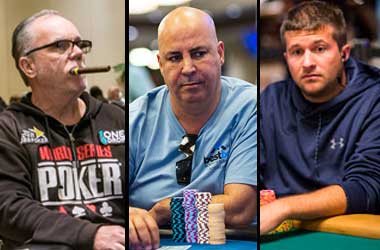 Steve “Cuz” Buckner has climbed to the top of the WPT Player of the Year leaderboard, overtaking former frontrunner Ray Qartomy.

Buckner remains hopeful that he would finally win a WPT title and if that happens he would dedicate the title to his late mother who has been his inspiration throughout his WPT journey.

Ray Qartomy, who dominated the POY standings last week, slid down to second place with 1,700 points which he earned for reaching the final table in two events.

Chad Eveslage has enhanced his chances of winning the POY title after climbing to 3rd place, thanks to his victory at the Five Diamond World Poker Classic Main Event which earned him 1,300 points to bring his total to 1,475 points. There are just three POY-eligible events left and Eveslage could very well take home the title if he scores another deep run in one of those tournaments.

Also in contention for the POY award is Mike Vanier who sits in 4th place alongside Alexander Yen and Mark Davis. The trio collected 1,400 points each to reach their current spots. Robert Mizrachi comes next with 1,300 points, while Chance Kornuth and Corey Wade are also tied at 9th place with 1,275 points. Anton Wigg also made it to the top 10 with 1,250 points.

Three Events to Go before POY Winner is Crowned

The POY race now has a new leader but the competition will intensify over the next couple of months as the three final tournaments play out. Players are looking forward to the next POY-eligible event on the schedule, a $3,500 Main Event which runs as part of the Seminole Rock ‘N’ Roll Poker Open in Hollywood Florida. The tournament kicks off on November 25.

Players can also earn points in the $1,100 WPT Prime Championship scheduled for December 8 at Wynn, which will then be followed by the record-breaking WPT World Championship also at Wynn Las Vegas which gets underway on December 12.