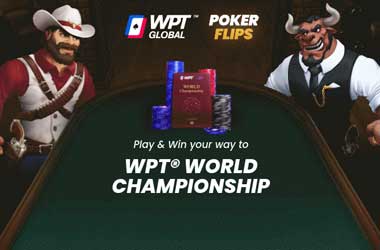 With the record-breaking WPT World Championship fast approaching, players are on the hunt for ways to enter the tournament for a cheaper price, considering that not everyone can afford the $10,400 buy-in.

Well, here’s some good news from WPT Global – the online poker room is running a new game called “Poker Flips” that awards WPT World Championship packages. That’s on top of the daily satellites currently running on the platform which also give players the chance to qualify for the tournament for as low as $5.

How to Win a WPT World Championship Package via Poker Flips

Poker Flips is basically a betting game where players place bets on the outcome of a poker hand – either a Cowboy, a Bull, or tie. They may also bet on the ranking of the winning hand.

The action begins when two cards are dealt face down to the Cowboy and the Bull, alongside five community cards. Players must then place their bets within 15 seconds. After that, all of the cards are shown, with the payouts distributed to the winning players. The points multiplier differs with each winning bet.

If you get lucky enough, you can win as much as 248x your bet, but apart from that, your Poker Flips sessions will also help you secure a ticket to the WPT World Championship. Each time you win, you’ll earn points for a special leaderboard which awards $12,000 in cash prizes each week to the top five players.

The leaderboard promo is now in its second week (Sept. 4-10) and you still have two more weeks to accumulate as many points as you can. You may also boost your points by playing Poker Flips 3, 5, or 7 days in a row.

At the end of the promo on September 24, the players finishing in the top five will each take home a WPT World Championship package.

Being Promoted As Record Setting Event