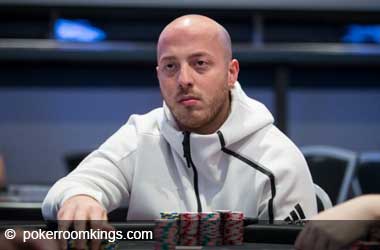 Kaimakamis outclassed Israel’s Shahar Levi heads-up to win the top prize worth €167,056, plus free entry into the €10,350 WSOPE Main Event.

Levi earned €103,216 for his runner-up finish and also won a seat to the Main Event.

Kaimakamis’ victory represents the fifth gold bracelet for his home country of Greece and follows on from the success of fellow Greek Aristeidis Moschonas who also bagged a bracelet during the 50th WSOP in Vegas earlier this summer.

Kaimakamis played cash games prior to transitioning to tournaments a few years back. He had a successful run at the live felts even before banking his largest cash to date this year. His total live earnings prior to his WSOPE victory stood at almost $250,000 — a feat he achieved over the course of three years. During last year’s edition of the WSOPE, Kaimakamis placed third in the €1,100 Turbo Bounty Hunter for €25,468. The event was won by Ukraine’s Mykhailo Gutyi for €61,299.

Reflecting on his victory, Kaimakamis said winning his maiden bracelet is a big achievement for him.

Kaimakamis entered the Mini Main Event with one of the shorter stacks and slowly climbed his way to the top. The Greek poker pro said he did not aim for the top spot right away as he knew the rest of the competitors were also eyeing the lion’s share of the prize. Kaimakamis’ initial goal was to be able to make it to the Top 5 for a chance to win a ticket to the even bigger WSOPE Main Event.

Apart from Kaimakamis and Levi, the other players who were able to win a seat to the Main Event are Venezuela’s Jose Rivas who placed 3rd for €72,474, German poker pro Markus Jordan who finished 4th for €51,628, and Switzerland’s Didier Rabi who also earned €37,321 for his fifth place finish.

The UK’s Andrew Bak fell short of claiming a Main Event ticket after finishing in sixth place for €27,382. Rounding out the final table of nine were French pro Luigi Macaluso who took home €20,396 for finishing 7th Israel’s Leonid Vanovski finished in 8th place for €15,426, and Italian player Gerardo Giammugnani took home €11,850 for his ninth place finish.