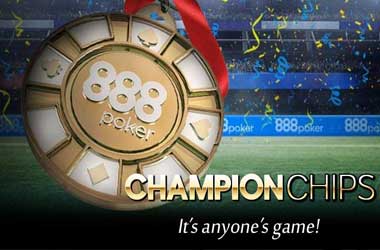 888poker players have something to look forward to this week as the online poker operator hosts the Summer Champion-Chips series, featuring a total of 18 sporting-themed poker events with valuable prize pools up for grabs.

Players have plenty of opportunities to take part in the series with tons of freeroll tournaments and satellites currently running.

The Summer Champion-Chips kicked off on Sunday (August 4), via a 5-max “Opening Ceremony” which attracted hundreds of entries.

There are a number of exciting events that have been scheduled throughout this week.

The Main Event is named “Marathon”, which takes place on August 11, with a buy-in of $33, and has $42,000 in guaranteed prize money. The schedule also features other formats such as Pot-Limit Omaha, Turbo and Super Turbo.

To make the series more exciting, 888poker has put together a very flexible satellite program for players, allowing them to use their winning tickets to enter any event. Say for example, if you earned a $5.50 ticket via a Big Fish satellite, you will be able to use this ticket to take part in a Champion-Chips series event, provided they are of the same value.

So if you’re keen on maximizing your ROI, you can choose to take part in these Big Fish mega-satellites and then utilize the ticket to enter the Champion-Chips events. To get started, you need to sign up with 888poker. The site offers a no deposit poker bonus of up to $88 for new players. If you’re an existing player, then you’re good to go! The series ends on August 11.