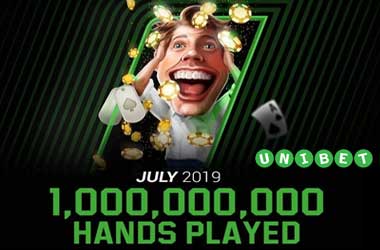 Five years after launching its own platform, Unibet Poker is set to achieve a major landmark as it prepares to deal its one billionth hand. Unibet Poker initially started out by operating as part of the Microgaming Poker Network (MPN).

In March 2014, it moved to its own standalone online poker client and dealt its 100 millionth hand nine months later in December 2014.

Exciting prizes await players as Unibet Poker gears up for an epic milestone. An additional €1,000 will be awarded to the winner of the billionth hand, regardless of the stakes they are playing for at the time the billionth hand is dealt. So even if you’re only taking a shot at a table for as low as €0.02, you are guaranteed to win €1,000.

Those being dealt cards during the billionth hand won’t be left out either as they too will receive €200 in cash. All cash game players playing No-Limit Hold’em, Pot Limit Omaha or Banzai are covered under this promotion.

Unibet Poker is also hosting a €10,000 Billionth Hand Freeroll which takes place two days after the billionth hand is dealt. In order to take part in this free tournament, players are required to have seen at least 10 flops on the day Unibet Poker marks its billionth hand.

Over the years, Unibet Poker has grown in popularity, coming up with fresh ideas to improve its online poker offering. The online poker room is primarily focused on recreational players, adopting software policies that prevent “bum hunting“, a practice that puts the weaker players at a disadvantage.

Seat selection programs are prohibited at the site, and to better protect themselves from predatory opponents, players are allowed to change their screen names three times each day. In 2016, Unibet Poker went through a major software update by launching version 2.0, with tons of new fun features geared towards social gaming.

In 2018, the site decided to scrap high stakes tables to provide a better gaming environment for recreational players. The move was somewhat controversial but the operator continued to grow and even became more popular. Players should grab a seat at Unibet Poker’s tables over the next few weeks to become part of the billionth hand celebrations.