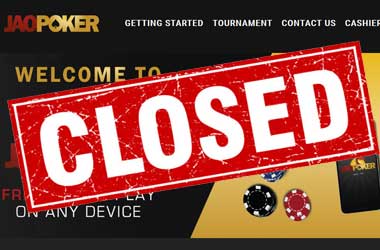 Unregulated poker site Jao Poker suddenly announced its closure, leaving its players clueless as to whether they will still be unable to claim their remaining balances.

When Jao Poker started out, many people were already cautious of the site for incorporating a shady affiliate program into its system.

Todd Witteles of Poker Fraud Alert outlined the red flags associated with the poker site early on in his forum. Some of the red flags pointed out include the site’s multi-level marketing strategy, the use of PayPal to handle its transactions and offering services to U.S based players while being licensed in Cambodia.

Jao Poker’s multi-level marketing strategy was seen by many as more of a pyramid scheme, where “affiliates” would need to pay $250 to get into the program.

In theory, their money would grow as they recruited more affiliates who will be paying the same entry fee. This kind of scheme is usually adopted by businesses who indulge in scamming, as the pyramid business model has been proven to be unsustainable and often illegal.

On top of its shady affiliate strategy, Witteles pointed out the use of PayPal as a huge danger zone for many players since Paypal has a very strict anti-gambling stance. Frozen and locked accounts are common in the site when they flag unusual amounts of money being deposited into a person’s account.

Jao Poker Looks To Move On to New Site

For a while, talk of Jao Poker red flags subsided most likely because players lost interest in the site. But earlier this month, discussions commenced on the popular Two Plus Two forum where a Jao Poker player reported that it’s been 3 weeks since he has requested for a $1,550 cashout via Bitcoin and is yet to receive a reply. According to Jao Poker regulations, withdrawals should only take 2-3 business days.

One day after the Jao Poker player posted his complaint; Witteles confirmed via his site that Jao Poker had closed. In what appears like an e-mail blast to its members, Jao Poker said that the site has closed and updates on poker players’ balances will be published via the “communitypokerchat”. The email also stated that their games would soon relocate to 64Spades.com.

Jao Poker representative Tam Nguyen played a key role in promoting the poker site in 2017. However, he took to Facebook to quickly distance himself from the company after people got wind of the announcement.

In a statement, Nguyen said,

FYI, I don’t have anyone’s money. I didn’t own the site. I was a promoter and game ambassador. Jao is like any other business. You do well and thrive or try to do well and can still fail. For those who joined the ride it was good while it lasted

As of this writing, the Jao Poker site is still accessible and has not put up any signs indicating its shutdown.