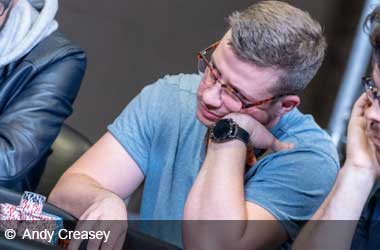 Kyle McCague emerged victorious in the £230 Main Event during the Lex Live 2 tournament held at Aspers Casino in London, taking home the top prize of £26,945.

McCague outclassed a field of 536 unique players and 889 entries and agreed to a three-way deal with runner-up Christian Gicu Stanciu and 3rd place finisher Atanas Pavlov to secure the title. Stanciu and Pavlov walked away with £20,095 and £20,015 respectively for their efforts.

McCague keeps himself busy by working as a Poker Product Manager. When he entered Day 1a of the tournament, all he wanted was to enjoy the game and perhaps just have some good time with friends. But things eventually went in his favor — he finished the first starting flight second in chips and continued his impressive run, ultimately taking the dominant position all the way to Day 3.

After his win, McCague was all praises for the tournament’s namesake Lex Veldhuis, who he said has remained passionate about what he does, showing impressive work ethic in promoting the beautiful mind sport that is poker. McCague revealed he used to watch Veldhuis’ Twitch stream and got the chance to meet the pro before when he took part in a staff tournament. Even now, McCague still watch Veldhuis’ highlight videos on YouTube.

Commenting on the tournament, McCague said the tournament was one-of-a-kind in a sense that he was able to play with good friends and enjoy the cool, nice ambiance on the featured table. There was no pressure, everyone was exchanging some good words and wishing each other well, McCague said.

Nine players made it to the final table and intense action saw three players eliminated early in the game. With six players remaining, the action slowed down and the chip lead was passed back and forth between several players. Eventually, Claudiu Radasciuc exited in 6th place for £6,294. He was followed to the payout desk by Carl Von Dobeln who finished 5th for £7,788, and Gareth Smith who ended his bid in 4th place for £10,419.

The three remaining players decided to take a 30-minute break to negotiate a chop. They agreed to leave £7,000 to play for, with each of them already guaranteed £20,000 regardless of the result.

When it was all over, it was McCague who came out on top and went on to win the title and secure the lion’s share of the prize. The inaugural Lex Live Main Event was won by Danny De Vos in March.