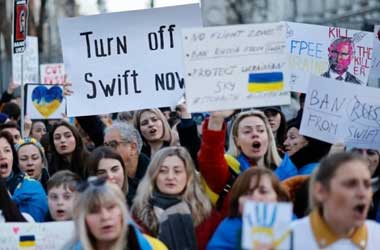 Russia has recently been hit with major sanctions as it continues its invasion of Ukraine.

Its banking system, in particular, is facing a looming collapse as some of the world’s most powerful countries this week agreed to cut several Russian commercial banks from the SWIFT global payments system, and this is having an impact on poker players.

The poker landscape in Russia has always been complicated, even before President Vladimir Putin ordered a special military operation against Ukraine. Regulatory changes have pushed operators to scale down their Russian operations or withdraw from the market altogether.

In November 2021, PokerStars was forced to close its EU network to Russian players to adhere to the country’s gambling laws. Those in Russia who want to continue playing on PokerStars now need to download a localized platform linked with the site’s land-based casino partner, Casino Sochi.

partypoker also decided to leave the Russian market as part of plans to focus its operations mainly on regulated markets. Its Sochi site closed down in 2021 after failing to gain any traction. With localized platforms shutting down, players could previously continue to play via unlicensed offshore sites, but that’s no longer an option now that international bank transfers from and into Russia are banned.

At the moment, the only way for Russians to play real money online poker games is through sites that support cryptocurrency transactions. Players using crypto to play online aren’t directly affected by the restrictions as payments aren’t processed using traditional banking methods. They can also donate to help people in Ukraine using Bitcoin and other cryptocurrencies.

In the wake of the ongoing war in Ukraine, Tony G has stepped up to the plate to help displaced Ukrainians find a safe place in his home country of Lithuania. The businessman/poker player/philanthropist is currently accepting cash donations via his charitable fund. Crypto buffs may also extend their help using Bitcoin and Ethereum.

Apart from Tony G, crypto gambling site SportsBet.io is also accepting crypto donations to help the people in Ukraine. The operator will match all donations collected until March 3.