UFC 241 Packages Up for Grabs With PokerStars

UFC 241 Packages Up for Grabs With PokerStars June 20, 2019 Gabrielle Monet

UFC 241 Packages Up for Grabs With PokerStars 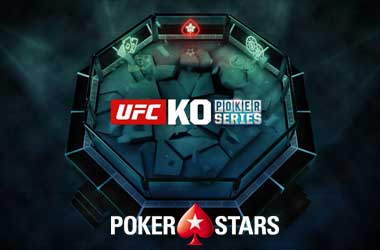 PokerStars is giving MMA and poker fans alike the chance to witness live action inside the world-famous octagon.

As part of the UFC KO Poker Series, which takes place from June 23-30, the online poker giant will award three packages to UFC 241: Cormier Vs. Miocic 2, taking the action from the virtual octagon to the real-life arena.

PokerStars secured an exclusive deal with the American MMA company in late 2018. As part of the new partnership, the UFC brand has begun appearing in PokerStars Spin & Go tournaments in April of this year. The following month saw three prominent figures from the MMA world being added to the roster of PokerStars Ambassadors: legendary announcer Bruce Buffer, light heavyweight sensation Johnny Walker and heavyweight champion Daniel Cormier.

In its latest sign of partnership with the UFC, PokerStars is bringing the UFC KO Poker series to its online felt, featuring more than $10 million in total guarantees. The series promises to combine the thrill and skill of UFC and poker through an exciting no-mercy, knockout format, said Buffer.

There are three ways to secure a free ticket to UFC 241. The player with the single largest number of total knockouts in the upcoming series will get the first package. Meanwhile, those who record three KOs will be shortlisted into an All-In Shootout which is set to take place on July 2 – the winner will grab the second package.

Any player who is able to finish off at least six opponents across all events will be offered a ticket to a second All-In Shooutout happening on July 3, in which the third package will be awarded.

The Cormier Vs. Miocic fight will take place at the Honda Center in Anaheim, California on August 17.

The main highlight of the series is the $109 buy-in Sunday Million Main Event which guarantees a whopping $1.5 million. Players can choose from a total of 68 events, with buy-ins starting at $11 all the way up to $2,100. Satellites will also run throughout the series and players can take part for as low as $0.11. UFC Spin & Go’s will also give players the chance to win KO Poker Series tickets, including a Main Event seat, with entry fees starting at $2.75.

UFC fans in Southern Europe will be able to join in on the action as PokerStars will also host a UFC KO Poker Week, featuring €2 million in total guarantees spread across 42 events. The Italians aren’t left out either as they will also have their own version of the UFC KO Poker Week, with more than 30 events, guaranteeing €1 million.