Ty Stewart Opens Up About Proposed Changes For 2017 WSOP

Ty Stewart Opens Up About Proposed Changes For 2017 WSOP 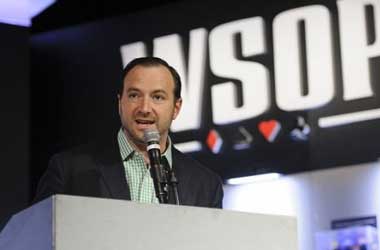 The recent announcement from the World Series of Poker (WSOP) regarding a new broadcast deal has given rise to a major change in the 2017 schedule, causing ripples in the poker industry.

The deal has resulted in the final table also known as ‘November Nine‘ to be moved up to July. Since 2008, the final has been held in November in order to allow viewers to enjoy televised play without knowing the winner in advance.

The changed schedule is due to a new agreement between the WSOP, its official broadcast partner ESPN and Poker Central, under which WSOP games will have same-day coverage instead of staggered televised broadcasts. The coverage will span regular TV broadcasts on ESPN and live streaming by Poker Central.

Speaking to media, WSOP Executive Director Ty Stewart said that it was a key focus for the WSOP to see that poker received mainstream media attention. He pointed out that a lot of changes had occurred since 2008 when people watched weekly ESPN shows on poker. Social and digital media was influencing people’s consumption patterns, and therefore the model had to be changed.

In a statement, Ty Stewart said

t's a whole new broadcast model. Comprehensive same-day coverage will begin on Day 1A (July 8) and continue all the way through to the final table. Linear complimented by digital. Basically, we have "November Nine"-like programming for the entire duration of the tournament. So the goal is to build engagement each day, and core to this approach is the viewer's expectation to pay it off while engagement is high.

He added that this format would ensure that the program becomes this summer's most binge-watched program, which would be good for poker. According to Stewart, there were many reasons for the decision. The organization’s existing agreement with ESPN was about to expire this year and poor advertising revenues was affecting chances of it being renewed.

Stewart said that due to these reasons, the teams decided to completely overhaul the production and distribution model.

With Poker Central bearing much of the production costs, ESPN would now ensure that the program could gain a more suitable TV slot. He pointed out that July was a great window to bring back attention to poker with reduced competition from other sporting events.

Regarding the newly-introduced two day break before the final table, Stewart said that the pause would help drum up interest, provide rest to players and enable players’ supporters to join the game. Stewart is confident that the 2017 WSOP will yet again break participation records.