Two Players Get Disqualified from 2019 WSOP For Crazy Behaviour

Two Players Get Disqualified from 2019 WSOP For Crazy Behaviour 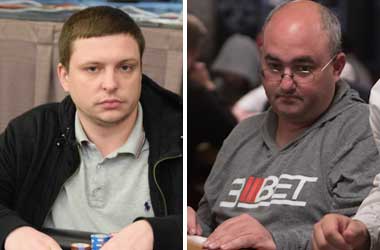 Two players were disqualified from the 2019 World Series of Poker (WSOP) Main Event during the first level of play.

The disqualifications occurred in different rooms, which led to both players being forced out of the game and their $10,000 buy-in being forfeited.

The first incident took place in the Brasilia Room, at the same table where 2015 WSOP Main Event champion Joe McKeehen played. The player in question reportedly reached over and grabbed the chips of his left-hand neighbour after winning a small pot.

Georgii Belianin was allegedly smiling when he did this, but his poor and ill-timed attempt at humour violated the game’s rules. Jack Effel, WSOP Vice President, quickly came over and escorted Belianin out of the tournament area. His chips were removed from the play but his $10,000 buy-in stayed.

As per tournament rules, players shouldn’t touch chips that don’t belong to them. Especially in the Main Event where huge money is on the line, you are only allowed to take care of your own chips and are prohibited from touching those of your opponents. Effel said that anyone who is disqualified from the WSOP can be subjected to multiple consequences, including being banned from all Caesars properties.

While it wasn’t clear what pushed Belianin to exhibit such unprofessional behaviour, Tom Peterson, who sat directly next to Belianin said he was drunk. Belianin took full responsibility for being unprofessional in an apology posted on Twitter. The player admitted he was up all night drinking and playing cash games before deciding to register into the Main Event.

Belianin said he couldn’t remember much of what he did due to intoxication. According to him, it was the first time that he was ever involved in such trouble, and that he had no prior record of engaging in suspicious activities.

In the second disqualification of the day, a man playing in the Pavilion Yellow section was escorted off the premises after exposing himself at Table #317. Ken Strauss lowered his pants after going all-in blind, and threw his shoes around, hitting the dealer tray.

Like Belianin, Strauss also appeared to be drunk. He was immediately disqualified and escorted out of the room with his stack removed from the tournament – obviously not a great way to burn through a $10,000 buy-in.

Uhhhhhh what is going on at the #WSOP main event??? Player shoves blind, drops his pants, then throws his shoe on the table ? ? ?(video via @blattsmullet) pic.twitter.com/oHGk5pjlnJ