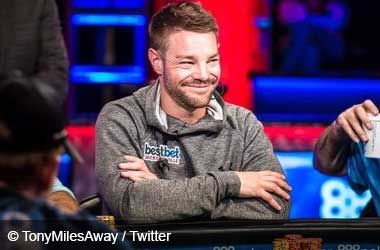 Shortly after his massive victory, he agreed to a prop bet with fellow poker pro Shaun Deeb. Under the terms, Miles would try his luck on the show American Ninja Warrior (ANW).

To win the bet, the Utah native should advance at least one round in the competition. He has three years to accomplish his goal.

Last year, Miles failed in his first attempt at 25-1 odds, with his $5K on the line. Both Miles and Deeb agreed that the odds will decrease each year to 20-1, and 15-1. Now, Miles is taking another shot and could win $100,000 from his $5K bet if he eventually succeeds this year. Last month, Miles announced on Twitter that he got the call and will be competing once again on ANW which is now on its 12th season.

And the bet is BACK!! I’m so honored to announce that I GOT THE CALL!!!! I’ll be competing on American Ninja Warrior season 12 in Washington D.C. on April 11-12. Got some sickos in the lab with me helping me prepare… https://t.co/QBgfCDhQtd

The good news brought a new level of joy and excitement for Miles considering the long and arduous application process that he and tens of thousands of other applicants have to go through to be accepted in the competition. This involves months of preparation, and sharing your athletic abilities, showcasing your personality as well as your personal life experiences in a three-minute audition video which will serve as your main ticket into the show.

During Miles’ first attempt in 2019, he was not able to advance further after failing in the spinning blocks course. This particular obstacle involves six boxes of different shapes, surrounding a pole that allows the contestants to spin.

Miles admitted that he was not fully mentally prepared for the competition last year as he was going through some personal issues. Because of this, he was not able to start training early, though he remained confident of his athletic abilities owing to his background in wakeboarding and gymnastics.

Miles may have failed during his first try, but he is now focused on taking a second shot. He started training early and dedicated himself to this challenge, training rigorously for four to five days a week. The poker pro acknowledged that it’s the money serving as primary motivation for him to win the competition.

The show was originally scheduled for April 11-12 in Washington DC, but it has been postponed due to the ongoing coronavirus pandemic.