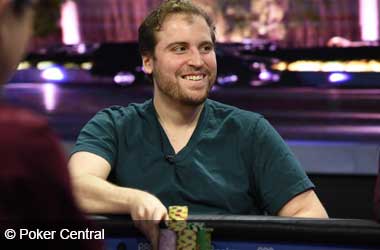 Tom Marchese has added another seven-figure score to his resume after winning the partypoker MILLIONS Vegas at the Aria Resort and Casino, the first-ever partypoker LIVE MILLIONS event held in the United States.

The event took more than 10 hours to play down to a winner, and when the dust settled it was Marchese who emerged as champion, claiming a whopping $1,000,000 as top prize. The American poker pro outlasted a field of 536 entries and defeated Jeremy Ausmus heads-up to secure the title.

Nine players battled it out at the final table for a shot at the $1 million grand prize. The first player to fall was 2003 World Series of Poker Main Event champion Chris Moneymaker who called off a shove from Marchese with pocket kings against the latter’s set. Moneymaker collected $90,000 for his 9th place finish, with Marchese taking a considerable chip lead.

Ana Marquez was responsible for the next elimination after her pocket eights won a race against Tobias Duthweiler‘s king-jack, sending him to the cashier in 8th place for $100,000. Marquez continued to scoop more pots, enabling her to move into second position in the chip counts, behind Marchese, but the eventual winner managed to reinforce his chip stack after finishing off Germany’s Rainer Kempe who exited in 7th place, taking home $130,000.

With six players remaining, Marchese was dominating the play but Ausmus was able to closely follow him after eliminating Conor Beresford who busted in sixth place for a $170,000 payout. But Marchese managed to widen the gap after scoring another knockout, with his ace-queen defeating Sergio Aido‘s ace-three. Aido walked away with $230,000 as the fifth-place finisher. Marchese found another victim in Freddy Deeb, who left the table after losing a classic blind on blind clash against Marchese. Deeb finished 4th for $319,200.

Ausmus just wouldn’t give up as he once again closed the gap on Marchese after eliminating Marquez in third place, collecting $445,000 – the largest score of her career.

Marchese and Ausmus then engaged in a heads-up battle, with the former holding an almost 3-to-2 chip advantage. As play progressed, Marchese extended that lead, and when the final hand was dealt, Ausmus shoved with king-ten and Marchese called with ace-jack.