Tight Race Continues For 2019 GPI Player OF The Year Title

Tight Race Continues For 2019 GPI Player OF The Year Title 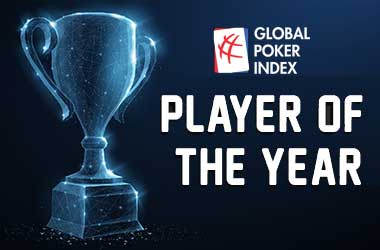 Robert Campbell had a fantastic year, winning two World Series of Poker bracelets, and ultimately being named the 2019 WSOP Player of the Year.

However, the race is not over yet for players who have their eyes on this year’s Global Poker Index Player of the Year award.

The GPI team is now waiting for the full live tournament results to emerge in December before crowning the new POY.

Players in the running for the award will be giving it their all as they have one last shot in 2019 to win one of poker’s most sought-after accolades.

Could 2019 be the year of the Australian poker player? Australian poker pro Robert Campbell topped the WSOP POY race, and his fellow countryman Kahle Burns currently leads the GPI POY leaderboard. If the standings remain unchanged throughout December, Australia will have two POY titles this year.

Trailing behind Burns is Sean Winter who is at No. 2. The American poker pro was initially leading the race before being taken over by Burns in the last two weeks. The Australian is presently ahead by 18 points, and Winter has just less than a month to regain the number one position.

Winter is followed by current all-time money list leader Bryn Kenney at No. 3. British poker pro Stephen Chidwick occupies the No. 4 spot, while Manig Loeser sits at No. 5. Rounding out the current GPI POY Top 10 are Rainer Kempe at No. 6, Anthony Zinno at No. 7, Sam Greenwood at No. 8, Shannon Shorr at No. 9 and Joseph Cheong at No. 10.

Meanwhile, Chidwick is currently at the top of the GPI rankings, with scores not restricted to the players’ top 13 cashes. 2018 GPI POY Alex Foxen is at No. 2, Zinno at No. 3, Winter at No. 4, and Loeser at No. 5. Cheong occupies the No. 6 spot, followed by Kempe at No. 7, Jeremy Ausmus at No. 8, Danny Tang at No. 9, and the only female player in the Top 10, Kristen Bicknell taking the final spot.

The GPI POY points calculation process is a bit complex, taking into account the player’s performance in two six-month periods. The GPI team then extracts the best 13 scores of each player before coming up with the final tally of points.

Results at the upcoming European Poker Tour (EPT) Prague Main Event, as well as many other high-stakes events during the festival could dramatically change the rankings, so leaderboard frontrunners will be giving it their all in the coming days to claim the GPI POY title.