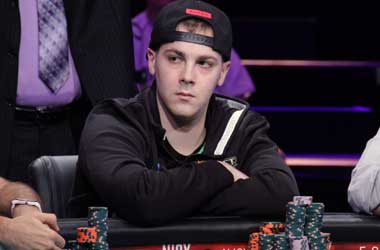 The first ever WSOP.com Online High Roller event – The $3,333 Big Grind was won by Thomas ‘FLOATZ Cannuli. His win netted him his first WSOP gold bracelet along with prize money of $322,815.

This World Series of Poker (WSOP) online event had the highest buy-in ($3,333) so far amongst all online WSOP gold bracelet events conducted till date and attracted a field of 424 entries, building a stunning prize pool of $1,335,600.

The WSOP has been holding online gold bracelet events on WSOP.com since 2015. This year the range of online events was expanded to introduce three more events. The first was the 2017 WSOP $333 buy-in no-limit hold’em ‘Little Grind’ which attracted a field of 2,509 entries and the second event was the Big Grind which Cannuli won.

In a statement Cannuli said,

It was an incredible feeling. The crazy part was that winning one this time wasn’t a surprise. I told people back in January that I was going to win one this year. I’ve been playing the best poker of my life, and I was confident I could do it.

A poker pro from Cape May, New Jersey, Cannuli’s total live poker earnings before this win was $1.5 million. Prior to this win, his biggest success was finishing sixth at the 2015 World Series of Poker Main Event taking home $1,426,283. He has been a regular player at Las Vegas casinos and also at the Borgata Hotel Casino & Spa in Atlantic City.

Cannuli was in fact juggling two poker games while playing in the Big Grind. He played the online tournament on his phone while participating in a cash game being held at the Bellagio. Cannuli said that he was used to playing 12 hands at a time so juggling the two wasn’t very difficult for him.

Cannuli entered the top ten chip counts mid way through the online tournament. Although he spent a bit of time in the bottom half, he soon secured the third spot behind Tara ‘BeatrixKiddo’ Cain and Adam ‘HLEDERERER’ Owen. After eliminating the rest of the competition, the three-way battle between them ended with Cannuli eliminating both of them in a single hand with pocket tens. Cain finished second and took home $201,408 while Owen took home $136,231 for his third place finish.

Cannuli called it the best day of his poker career but has said that he wasn’t done yet. He will be participating in the Main Event scheduled to start this weekend as well as other events during the course of this week. He believes he has a good chance of winning his second WSOP gold bracelet before the 2017 WSOP is finished.