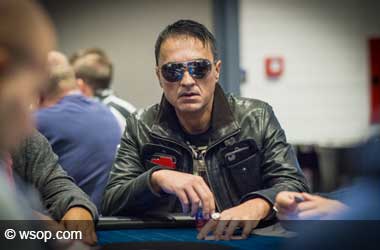 The win also earned him his first WSOP gold bracelet and the second WSOP bracelet for Switzerland.

Hot also managed to deny Phil Hellmuth his 16th WSOP bracelet after the American poker pro finished as runner-up to take home a prize of €238,509. Hot had to go through tough competition, outclassing a field of 45 entries which was made up of some of the best mixed-games specialist in the world, to secure the largest cash of his career.

The Swiss poker pro entered the competition during Day 2 and managed to advance to the final day as the chip leader. His aggressive playing style proved to be effective as he remained at the top of his game, unfazed by the big names he’s up against. In his post-win interview, the Swiss pro revealed he was able to win major pots by playing his opponents’ cards through bluffs, forcing them to fold.

Among the players who made the final table were Canada’s Alex Livingston who finished in 7th place for €38,389 while former All-Time Money List leader Daniel Negreanu took 6th place for €54,287. French pro Julien Martini earned €77,502 for finishing in 5th place while the UK’s Benny Glaser took the 4th spot for €111,689.

Poland’s Dzmitry Urbanovich had a good run but his luck ran out towards the end and he had to settle for 3rd place and a €162,463 payout. Hot entered heads-up play with a commanding lead against Hellmuth. The -time WSOP bracelet winner once again fell short of bagging his 16th gold bracelet after finishing third in another 8-Game event at the festival.

Hellmuth’s fate was sealed after losing a PLO hand against Hot. Both players flopped trips nines, but the Swiss player turned a full house to secure the title. This was the 11th time that Hellmuth had to settle up for a second place finish.

Hot finally won a gold bracelet after a failed attempt a few years ago, when he flew to Vegas to supposedly compete for the much-coveted accolade, but ended up losing his entire bankroll on the first night. The Swiss pro said he has no plans to go back to Vegas to win more bracelets, as he intends to stay in Europe and take part in tournaments.