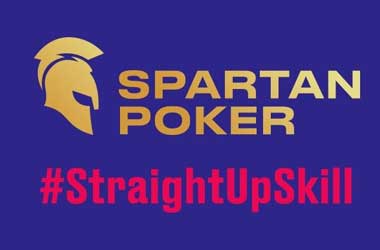 Spartan Poker, one of the leading online poker sites in India, has launched its brand-new logo as part of a rebranding strategy that aims to promote poker as a game of skill.

The image revamp has resulted in the addition of a new slogan to the Spartan Poker brand, “Straight Up Skill“, as the company joins the ongoing fight to make online poker legal across all parts of the country.

India’s legal system on poker games works in a similar manner as that of the United States. Games of chance are generally illegal in the country, but a legal action in 2016 lodged by a rummy club against government-enforced shutdowns gained the Supreme Court’s favor which ultimately resulted in the individual states obtaining the right to regulate games of skill, including poker, within their respective jurisdictions.

The legal case was brought forward by the Mahalakhmi Cultural Association, backed by online sites. It was initially junked by the division bench of the Madras High Court which ruled that playing rummy for stakes was considered gambling and therefore illegal.

Nagaland became the first state to regulate online poker, with Khelo365.com becoming the first legal online poker site to serve Indian players. Soon after, several poker operators followed suit and established their own communities. Since 2016, the country has seen an increasing number of poker sites getting their licenses, however nationwide legalization has remained an uphill battle.

Most of India, including the state of Gujarat, still consider poker as a game of luck, making it illegal. While this is the case, the country has continued to become home to a bustling online poker market, attracting many local players to the game each year. This is one of the main reasons why operators have been ramping up their efforts for a nationwide regulation.

Allowing poker throughout India will give domestic players much-needed freedom to play their favorite game without fear of legal consequences, and will open up bigger opportunities as major tournaments will become the norm in a regulated market. Spartan Poker wants to lead the charge in making this happen.

Their latest rebranding will not only promote the company itself but also the game of poker in general. It wanted to express its underlying philosophy while at the same time become the country’s leading responsible poker platform. It aims to become an instrument to fix India’s fractured perception about poker and make the game more accessible to Indian players.