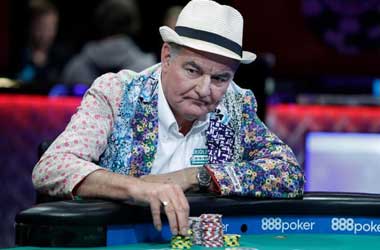 The recreational player-turned-poker millionaire John Hesp says he plans to play at the 2018 World Series of Poker (WSOP) but unlike the rest of the players, he won't be doing it for the money.

Hesp’s name became popular in the circuit last year after he became an overnight millionaire, after he finished 4th at the 2017 WSOP Main Event.

Donning a colorful quilt suit and a stand-out fedora hat amidst the sea of hoodies and headphones, Hesp became an overnight success after defeating thousands of pros and amateurs to end up at the coveted final table and took home $2.6 million.

According to Hesp, he entered the WSOP Main Event last year for a simple reason: simply to tick it off from his bucket list. As one of the most prestigious poker tournaments in the world, Hesp only dreamed of finishing in the top 1,084 and cash in on the $15,000 payout.

However, he did a lot better than he expected and made it to the final table. Hesp was thrilled with his success at the 2017 WSOP Main Event and at one point went on to be the chip leader ahead of Scott Blumstein, who eventually overtook him and won the title and the first prize of $8.15 million.

Prior to his 2017 WSOP Main Event success, Hesp had only $2,000 in live winnings, mostly from $14 games at Napoleon's Casino in Hull, England. In fact, before his million-dollar win, his biggest cashout was a £785 win from a £10 rebuy tournament at Napoleon's.

But Hesp reveals he never read an instructional book on poker or even studied comprehensively how professional poker players play. He credits his naiveté and genuineness as key reasons for his success last year.

Hesp will turn 65 in June and wants to make sure he continues to live his life to the fullest. He has four children and seven grandchildren and says that he is currently in semi-retirement, letting a management team handle his caravan vacation home rental business. He will make a return to the 2018 WSOP and says that while there might be others who expect him to do well, he goes in with the attitude of just having a wonderful time.

In a statement, Hesp said,

Getting in to the top thousand is not a small task. Last year was surreal, a dream. I was just having a ball. If I can replicate the pleasure and entertainment that I gained from playing in the Main Event last year, then every penny will be well spent.