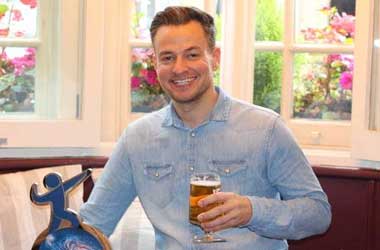 Early wins helped Jones and he secured the leaderboard spot in Event # 32 halfway through the series. Jones received €10,000 and a trophy for the winning performance and for consistently maintaining his top spot on the leaderboard.

The annual UCOP championships is in its’ third year now. The event was held between September 10 and 24 and had a guaranteed prize pool of €750,000. Total payouts during the course of the tournament amounted to a whopping €810,000, making this year’s event the biggest one till date. The UCOP used to be earlier known as the MPN (Microgaming Poker Network).

Jones, who had performed well in the MPN during the last couple of months, hadn’t planned on playing the entire UCOP series. Jones admits that the chance of winning a decent chunk of money in the tournament was one of the factors that prodded him to try out the first few days
before really committing to the series.

Jones started off decently in the early days of the tournament and it was the early successes that kept him motivated. In a statement, Jones said,

I had a couple of third place finishes and other deep runs to put me in the top five. Then a €5.4K win in Event #32 catapulted me to the top spot. I really wanted that trophy and I’m chuffed to actually win

That win came halfway through the series in Event #32 that had a guarantee of €30,000. It helped Jones lockup the top leaderboard spot and receive more than €5,000 for the win, a trophy and an additional €5,000 for maintaining the top spot consistently.

Jones quit his job in 2008 and started playing online poker for a living. A career in online poker gave him the opportunity to travel the world and the freedom to live in 35 countries so far. The UCOP win helped him capture the honors of the “Greatest Poker Player in the Universe”, a distinguished title that’s accorded at the tournament.

This year the UCOP, besides the guaranteed amounts also had on offer a €5,000 leaderboard for players who streamed their events during the tournament. This was won by Mark ‘Weazel’ Rubbathan.

Alex Scott, Head of Product (Network Games) at Microgaming congratulated Simon for the big win and expressed satisfaction at the huge increase in prize pools. Scott believes the next edition of the tournament will bring in many more poker players.