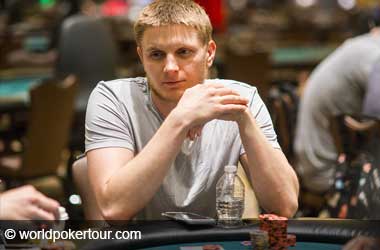 American poker pro Sam Soverel has been receiving a lot of flak after a controversial hand in the World Series of Poker (WSOP) $50,000 No-Limit Hold’em High Roller, which was eventually taken down by British poker pro Ben Heath.

The controversial hand was played out with four players remaining in the annual high roller event which attracted a total of 110 entries. Heath, Soverel, Russia’s Dmitry Yurasov and American poker pro Andrew Lichtenberger were competing for the top prize of $1,484,085 and a WSOP gold bracelet when the unexpected happened.

Soverel opened for a min-raise in Level 22 (100,000/200,000/200,000) of the event. He had the same stacks as Yurasov who shoved all-in for 4.93 million. Lichtenberger quickly got out of the way with his small blind, but Heath who was in the big blind, asked for a count while still indecisive about his next move.

Upon realizing he was running out of time, Heath tossed in a time bank card which would give him a 30-second extension to act. Being the initial raiser, Soverel who did not look like he was paying attention, immediately tossed his cards in the muck after Heath tossed in the red card. Soverel’s out-of-turn fold left Yurasov feeling agitated as it now became pretty much easier for Heath to call without having to worry about Soverel.

As expected, Heath called right away and Yurasov was eventually busted in fourth place for $458,138. Soverel was not penalized for his mistake and was permitted to continue playing. He finished third for $640,924. In a post-exit interview, the 2018 High Roller of the Year apologized for his mistake, saying it was unintentional and that Heath would have called either way.

Soverel’s careless act sparked criticism from several poker pros, with fellow high roller Isaac Haxton calling for his disqualification. In a Twitter post, Haxton said Soverel should have been slapped with an extreme penalty, saying he should be barred from WSOP events for one year. Haxton was adamant Soverel made the move intentionally, and that he did it with a superb acting performance.

If this is reported accurately, anything less than disqualification and fourth place money for Sam is insufficient. You absolutely can't let people get away with shit like this at the final table of a $50k. @wsophttps://t.co/E2D3CS3xTb

Justin Bonomo, who is currently ranked number one on Hendon Mob’s All-Time Money List, backed Haxton’s views. Bonomo said Soverel had a history of pulling such shady moves. The poker community also chipped in on social media to share their views and lash out at Soverel.

WSOP tournament director Matt Savage also shared his thoughts on the situation. Savage said he believed it was a careless error, a view supported by fellow tournament director Kenny Hallaert, who said Soverel should be penalized with three orbits and not a DQ.