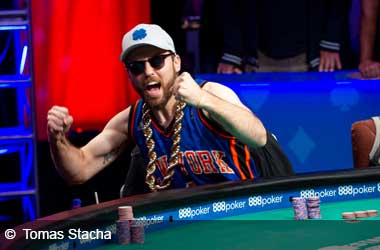 The poker vlogger held the chip lead when the final table kicked off and all along he dominated the entire battle, sending six opponents to the rail. He deprived British pro Jack “EarlGrey” Salter of his first WSOP victory after an intense heads-up match. Salter settled for second, with $98,621 in winnings.

The nine-handed final table began with three players being eliminated in quick succession. The first to go was Erick “Givmeaction“ But who was also the short stack when the action kicked off. But failed to advance further after his ace-queen suited lost to Sean “FilthyDiaper” Ruane‘s pocket sixes. But earned $13,543 for finishing ninth.

Depaulo then finished off Dominic “rgdoc” Ricciardi with ace-queen against ace-seven. Ricciardi landed in eighth place for $17,474. After that, the unstoppable Depaulo went on to eliminate four more players – Shannon “Aulophobia” Shorr busted after losing his ace-nine to the eventual winner’s pocket kings. Shorr walked away with $22,826 for finishing seventh.

Terry “mrterry007” Fleischer and Jessica “Jessyboo” Lanto followed Shorr to the rail, finishing sixth and fifth for $30,143 and $40,082 respectively. At that moment, Depaulo held majority of the chips, with a 5:1 advantage over his closest opponent.

His knockout streak continued with the elimination of Hayden “Luckbox89” Fortini in fourth place for $53,625. Eventual runner-up Salter then sent Ruane out of the game in third place for $72,410, before he entered heads-up play against Depaulo, with a 7 million gap in chips.

While Depaulo was the dominant player when the one-on-one battle started, Salter managed to grab the lead at one point. It wasn’t an easy job for Depaulo who had to battle hard to reinforce his lead and ultimately take home the title. Fortunately, he scored a massive double and eventually made his victory official after an all-in battle with pocket queens against Salter’s ace-jack.

Depaulo, who has $225,644 in live tournament earnings, was playing inside his car in New Jersey when he took down the Big 500 event. Last year, he came close to victory after finishing third in the $400 Colossus event during the 50th WSOP in Las Vegas.