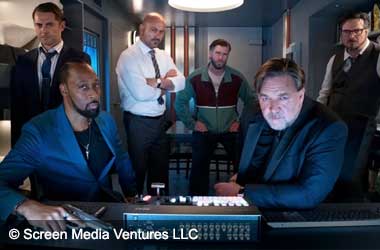 Poker fans have not had a good poker movie to watch for the last few years but that is expected to change when the new Poker Face movie gets released towards the end of the year.

Poker Face is the second movie directed by Russell Crowe. He made his directorial debut in the 2014 film “The Water Diviner“. His new movie is set in the world of high-stakes betting where he plays Jake Foley, a billionaire gambler who offers his best friends the chance to win life-changing money. But first, they must give up their best-kept secrets.

The pals participate in a high-stakes poker game at Russell’s Miami mansion, but as the game unfolds, they will learn it isn’t all about money.

Starring alongside Crowe is Hunger Games actor Liam Hemsworth and American rapper RZA of Wu-Tang Clan. Elsa Pataky of “Fast and Furious” is also part of the cast.

Crowe wrote the screenplay together with Stephen M. Coates. The film is produced by Gary Hamilton and Keith Rodger of Fear of God Films, alongside Ryan Hamilton and Ying Ye of Arclight Films. Jeanette Volturno and Jason Clark of Catchlight Studios also produced the movie, as well as Matt Williams and Addam Bramich.

Poker Face is set to be shown in theaters on November 16 and will be available on digital platforms starting November 22.

Screen Media will now handle the US distribution of the Russell Crowe thriller “Poker Face” after acquiring all North American rights to the movie from Arclight Films. Screen Media is a leading global independent motion picture distribution firm that operates as part of the American media company Chicken Soup for the Soul Entertainment.

David Fannon, chief acquisitions and distribution officer at Chicken Soup for the Soul Entertainment said they’ve been huge fans of Poker Face since they first learned of it years ago and they’re equally thrilled to collaborate with Crowe and the Arclight team to bring the movie to American poker audiences.