‘Run It Up Reno’ October To Giveaway PSPC Platinum Passes

‘Run It Up Reno’ October To Giveaway PSPC Platinum Passes 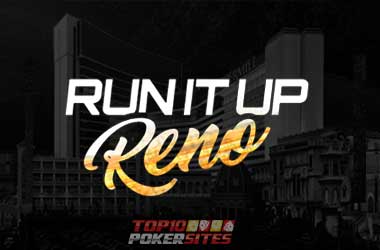 The schedule for Run It Up Reno was just released and it looks like there will plenty of fun for those in attendance.

The event will take place at Peppermill Resort and Casino and it will run from October 19th through to the 29th.

Aside from featuring 21 tournaments with $550,000 in GTD, running lots of promotions, and offering an expanded schedule, two lucky people will receive $30,000 Platinum Passes for the PokerStars Players No-Limit Hold’em Championship (PSPC) which takes place in Jan 2019.

A Platinum Pass includes the $25,000 entry fee to the PokerStars Players Championship, 6 nights at the Atlantis Resort in Nassau, plus $2,000 for travel expenses and room folio. One of these passes will be up for grabs at the $86 buy-in Moneymaker PSPC Tour event that is being held on October 23rd . The second pass will be given away at the Platinum Pass Satellite Event on October 29th.

Players can win their way into the Platinum Pass Satellite Event by wearing the funniest costume at the NLH Partner Event on October 21st , by singing karaoke during the Karaoke Party at Edge Nightclub on October 25th, or with a raffle ticket during the All In for Childhood Cancer Charity event. Three seats to the satellite will also be given away in a Platinum Pass Scavenger Hunt and they can be won through satellites on PokerStars and DraftKings. Past RIU Reno gold trophy event winners will automatically be given a seat.

In a statement, Somerville said

I’ve always wanted to do something for our past RIU Reno champions, like a leaderboard or something, and now letting any past RIU Reno trophy winner potentially represent us at the PSPC in The Bahamas, it’s super cool, such a cool opportunity. I pitched the idea to PokerStars and they thought it was super awesome. We have a reputation for the event being fun

Run It Up Reno – October

Other events on the 11-day RIU Reno schedule include a $160 All In for Childhood Cancer Charity Event and a $600 buy-in Main Event with $200,000 GTD. Somerville stated that he thinks that Run It Up Reno just might be one of the biggest tournaments ever held in Reno. A good mix of seasoned veterans like Fintan Hand and Chris Moneymaker will be in attendance along with quite a few first- timers.