Run It Up Poker Festival Comes To California In December

Run It Up Poker Festival Comes To California In December November 12, 2018 Stefan Nedeljkovic

Run It Up Poker Festival Comes To California In December 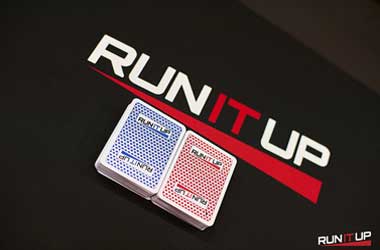 The Stones Gambling Hall in Citrus Heights, California will be the home of this year’s Run It Up (RIU) poker festival, which will run on Dec 5-9. Details have been announced by the festival’s host poker pro Jason Somerville.

Twitch streamers and reality TV stars including “Boston Rob” Mariano and Tyson Apostle from the Survivors show will come together at the festival. The tour is also expected to bring together Somerville’s RIU Twitch fans from across the globe.

The festival’s main focus is on low to mid-stakes events, attracting both serious and recreational players wanting to have some fun while playing a number of poker variants featured throughout the tour. Bringing RIU to the Stones would seem a good fit as the Northern California card room caters to a mix of casual poker players and seasoned pros.

Stones Gambling Hall’s Social Media Manager and Tournament Director Justin Kuraitis said convincing Somerville to bring RIU to the venue was not an easy task. First, they needed to play on persistence after being declined multiple times by Somerville. Stones first got in touch with the poker pro when he paid a visit to the venue to assist the StonesLive team in enhancing their streaming set up.

Kuraitis said StonesLive gave them the opportunity to showcase what they could bring to the table and eventually caused them to invest in it. Stones Live was once a simple office divider with commentators fronting a plastic wall. It has now been transformed into a state-of the-art commentary booth. This paved the way for more partnerships with Somerville as the latter was asked to conduct hands-on training with the venue’s production and commentary team.

Somerville and his team also assisted them with setting up proper camera angles and other operating procedures to make their stream quality world class. Somerville was impressed with their first partnership at the Stones biannual Classic series and the relationship grew from there.

The Birth of RIU Stones

With the success of their initial partnerships, Kuraitis asked Somerville if he could take his RIU event out of Reno and bring it to Stones. Somerville gave the go ahead and the Stones casino management did not think twice about the idea. The team-up immediately set its wheels in motion.

The Stones makes history as this will be the first RIU event to ever take place away from its original home – the Peppermill Reno. To mark the momentous event, the team agreed to establish a more compact schedule, with six action-packed events running throughout the five-day festival.