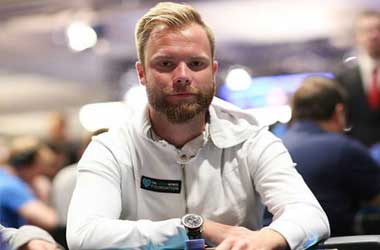 888poker’s XL Eclipse online tournament is providing a lot of excitement as there are a number of exciting events to be won. Robin “Inho” Ylitalo was one of those players who emerged victorious in the XL Eclipse $100,000 Tune Up at 888poker, taking home $21,709.

Ylitalo, who is widely considered among the best online poker players in the world, defeated “SiladuS92” from Russia to secure the title.

Both players agreed to a heads-up deal, with the Russian walking away with $19,061 as second prize.

The Tune Up event was a massive success, attended by some of the best and finest in the game, including 888poker ambassadors Ana “AnaMarquez” Marquez, Chris “888Moorman” Moorman, and Sofia Lovgren who clinched the 69th spot for $400. Moorman and Marquez however failed to finish in the money.

Only nine players returned to the final table, with the UK’s “easy_russ” leading the chips. The British player’s dominance was short-lived though as Ylitalo managed to take over up until the heads-up battle.

The first player to leave the final table was “Virgul94” from Malta after their ace-jack suited didn’t hold against the pocket kings and pocket nines held by two other competitors. “Virgul94” earned $1,877 for their 9th-place finish. Not long after, “IceStream” was the next to go after calling off with ace-queen suited the pocket kings of Russian player “advancement“. “IceStream” finished 8th for $2,815.

“IceStream” was followed by “M1k3n70a7” from Lithuania in seventh place for $4,066 after their ace-seven didn’t work out against the ace-jack suited of “SiladuS92“. Ylitalo then went on a knockout streak, sending three players out of the game consecutively.

During this time, the eventual winner was dominating the game, collecting almost half the chips in play.

“SiladuS92” eliminated “advancement” in third place for $12,635, leaving him an Ylitalo in heads-up play. While the Swedish pro began the heads battle with a 2:1 lead, his opponent was determined to win, with the both players alternately holding the top position. “SiladuS92” even managed to pull off a 6:1 edge before Ylitalo reinforced his dominance.

Both players then agreed to a deal, setting aside some cash to play for. When it was all said and done, it was Ylitalo who was crowned the winner.

The Swedish online poker sensation now has more than $12 million in total winnings in the online tournament arena.

Not too sure about choosing 888poker or TigerGaming, which offers the best deal? Read our handy guide here..