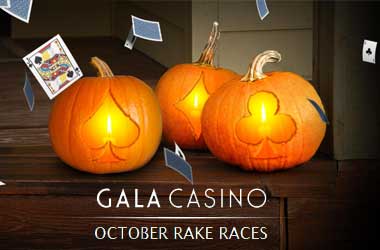 October is of course the month of the year when the Halloween rituals are played out in towns and cities all over the world, and as such many online poker sites will be offering some type of promotional offers during October that boast some form of spooky or Halloween related theme.

One site that has always be a hugely popular poker site is Gala Poker, which is owned and operated by one of the UK’s largest land based casino operators, and as such if you are seeking out a top rated and highly respected poker site at which to play you are certainly not going to go wrong playing there!

Throughout October Gala Poker have been running their Pumpkin Poker October Rake Races and as there is still several days in October left, you may be interested to learn more about this unique promotion offer, for there are some quite large cash prizes to be won!

Gala Poker has set aside $8000 to give away to their players who take part in this special set of Pumpkin Poker October Rake Races, the first set has just ended, however the second set of Rake Races are running from now until the 31st of October 2014 and as such you still have more than enough time to sign up and take part in them if you do fancy taking your chances at winning a share of the $8k prize pot!

All you have to do is to sign up and become a real money player at the Gala Poker site and by opting in for this promotion you will be earning Status Points every time you take part in any of their featured poker games as a real money player, the more points you earn and amass from now until the end of October 2014 will be added up and accumulated and if you manage to get awarded a certain number of points and end up being placed on their prize paying ladder board then you will be awarded with your fair share of that $8k in prizes.

There are a total of 50 cash prizes that can be won by Gala Poker players taking part in this promotion, and it does of course go without saying the higher valued cash prizes are reserved for those players amassing the most Status Points and ending up in the highest position on the leader board!