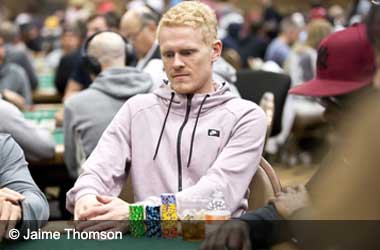 The Norwegian poker pro entered the final table as the chip leader and remained the dominant player all throughout, defeating Eelis Parssinen heads-up to secure the title and the top prize worth $391,731.

Stokkan held a significant chip lead as the final action kicked off and widened the gap even further when he eliminated Austria’s Jans Arends in 9th place for $32,972.

Adrian Mateos, probably the most successful poker pro at the final table, was gunning for his first partypoker MILLIONS Online Main Event title, but his journey came to an abrupt end after his pocket pair lost to Yannick Schumacher‘s backdoor flush. The four-time World Series of Poker (WSOP) bracelet winner finished in 8th place for $41,408.

It took around an hour before the next elimination took place, and it happened courtesy of Stokkan who sent Lars Kamphues to the rail in 7th place for $51,856. The Norwegian continued to dominate the chip counts with six players remaining, but Parssinen, who started the day as the short stack, managed to climb his way to the No. 2 position and narrowed Stokkan’s lead after eliminating Schumacher in 6th place for $65,365.

But Stokkan was just unstoppable. With Parssinen trailing close behind him, he scored two eliminations in a row. Alexandre Raymond was the first to go, finishing 5th for $84,186. Stokkan then went on to bust Taco De Goede who collected $122,164 for his 4th-place finish.

During three-handed play, there’s one more big name determined to take home the title, German poker pro Ole Schemion. But Parssinen didn’t allow that to happen as he sent the WSOP/WPT title holder out of the game in 3rd place for $186,169.

Preben Stokkan was still ahead in chips when heads-up play began with 102 big blinds but Parssinen was not too far behind with 89. The Finnish poker pro managed to grab the lead at one point, but that was short-lived as Stokkan regained his position during the subsequent action.

In the final hand, Parssinen raised pre-flop with 8h6d against Stokkan’s 7h5d. The Finnish poker pro made an open-ended straight draw on the Js7d5h flop while Stokkan’s cards improved to two pair.

Parssinen got a pair along with a draw on the 6c turn. When the Qh river came, Parssinen shoved and Stokkan called. The action eventually ended with Stokkan claiming the title and the $391,731 first-place prize which came along with a unique Party Ape NFT. Parssinen settled for second place with $270,214 in winnings.