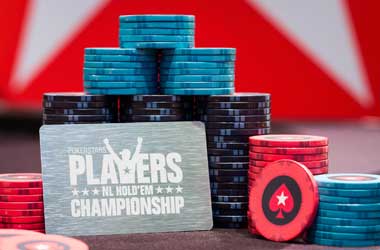 PokerStars’ Platinum Pass giveaway continues this November! The operator is awarding six Platinum Passes to players across its three U.S. markets – New Jersey, Michigan and Pennsylvania – throughout the month.

The Platinum Pass will send players to the second edition of the prestigious PokerStars Players Championship (PSPC) which will run as part of the PokerStars Caribbean Adventure (PCA) in January 2023 in the Bahamas.

Three of the Platinum Passes on offer have already been awarded this week via the Golden Ticket Freeroll promotion. One lucky player in each of the three states secured a ticket to the 2023 PSPC simply by opting into the promo and playing one hand of poker with a minimum buy-in of just $1.

Those who missed out on the Golden Ticket Freeroll promo have one more chance to win a highly-coveted Platinum Pass. All they need to do is to take part in the upcoming Fall Fest series and finish at the top of the leaderboard. The series kicks off on November 11. More details below.

Fall Fest will run in all of PokerStars’ three U.S. jurisdictions from November 11-28. The festival features nearly $2 million in combined guarantees, with the biggest chunk ($1 million) going to Pennsylvania. The series in New Jersey and Michigan will award $400,000 and $500,000 in guarantees respectively. Players can enter the series for as low as $5.

PokerStars ran a similar series in 2021 which attracted decent turnouts. This year, players have more reasons to take part in the festival, with a Platinum Pass up for grabs.

The Fall Fest comes with a leaderboard race for each state whereby the top finishers will qualify for a special Platinum Pass freeroll scheduled for November 29. The top 500 players in Pennsylvania will get the chance to win a Platinum Pass, with 300 in Michigan and 200 in New Jersey also set to compete in the special freeroll. PokerStars will release the full schedule of the Fall Fest series soon.

The inaugural $25,000 buy-in PSPC in 2019 attracted more than 1,000 entries, over 300 of that qualified via the Platinum Pass giveaway. The huge field generated more than $26 million in total prize pool, with Platinum Pass winner Ramón Colillas taking home the lion’s share of the prize worth $5.1 million.