PokerStars Signs Muskan Sethi As They Prepare For India Push

PokerStars Signs Muskan Sethi As They Prepare For India Push 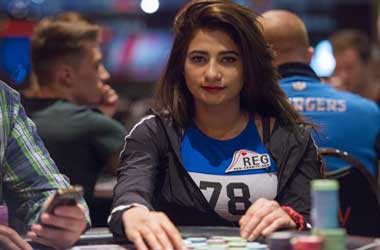 PokerStars India is now live and the brand is looking to build their Indian poker player database. One of the methods that PokerStars has adopted over the years to penetrating a new market is to sign a top local poker pro and get them to be ambassadors to promote the brand in the new market.

PokerStars has signed female poker player Muskan Sethi who was recently facilitated by the President of India for pioneering poker in the country. Sethi has $50,000 in recorded live cashes and more than $115,000 in online cashes.

While her career prize money is in the low six figure region, her contribution to poker in India has been phenomenal. She was announced as one of the faces of Global Poker League India in 2017 and was the captain of the Delhi Diehards team.

Sethi was very pleased on becoming a PokerStars brand ambassador and said that it was a dream come true for her. Sethi will look to encourage female poker pros in India to pursue their dreams of playing poker and making a living from the game.

PokerStars’ first move to solidify its presence in India came in 2015 when poker pro Aditya Agarwal became the first PokerStars Team Pro from India. When Agarwal joined Team Pro, Kirsty Thompson, PokerStars’ Head of Pro & Celebrity Management said that their partnership with him is essential to promote poker in India, where poker was still fairly new. Agarwal has done well since he joined Team PokerStars and has multiple cashes a WSOP events and went on to finish in second place in the recently concluded Asia Pacific Poker Tour in Macau.

PokerStars.in went live this week and the new platform gives Indian poker players the chance to wager in rupees and play amongst themselves. The Stars Group, which is the parent company of PokerStars partnered with a local operator to launch quickly and run a smooth operation.

In a statement, Rafi Ashkenazi, CEO of The Stars Group, said

In India, we have entered into an arrangement with a well-established domestic licensed lottery and gaming operator, which will give our brand access to this highly populated market and ability to build awareness for both our PokerStars brand and the game itself.

PokerStars has a reputation for dominating every market it enters and it will be interesting to see how long it takes for the online poker giant to become the number one poker operator in India.