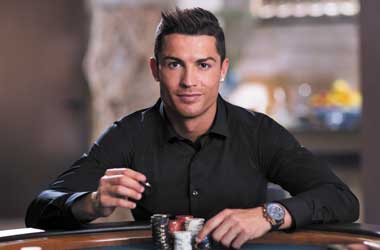 Cristiano Ronaldo can be described in many ways as he is one of the biggest sportstars on the planet. He is the captain of the Portugal team, star striker for Real Madrid, a two-time Champions League champion, a three-time FIFA Balon d’Or award winner, arguably the greatest football player of the current era and now member of Team PokerStars.

PokerStars, the biggest online poker website in the world recently announced that it had signed Cristiano Ronaldo who will act as the company’s brand ambassador and use his celebrity status to promote PokerStars across the globe and attract more people to play the game of poker. The company had Ronaldo sign a sponsorship contract but did not disclose how much they were paying him each year.

PokerStars has focused on signing some of the biggest sportstars in the world and has already signed the likes of Brazil/Barcelona Footballer Neymar Jr which we reported earlier this month, Brazilian football legend Ronaldo, tennis ace Rafael Nadal and Fatima Moreira de Melo who is a Olympic gold medal hockey player.

Ronaldo was reported to be the second highest paid sportstar in the world in 2014 and has a networth of around $80 million. His good looks and charismatic style of playing has helped him build a humongous fan following on social media with 35.5 million fans on Twitter and another 103 million subscribers on his official Facebook page. He currently sponsors a number of leading brands including Fly Emirates, Coca Cola, Motorola and Tag Heuer.

Earlier this month there was speculation if Ronaldo was going to team up with PokerStars after Ronaldo posted a picture of himself on social media which showed him with a PokerStars deck of cards. Yet PokerStars immediately put any speculation to rest by saying it was a mere coincidence and no deal was in place.

Speaking about his new partnership with PokerStars, Ronaldo said

I like playing for winning teams, and PokerStars is the perfect partner for me. As a brand, it is always looking at ways to improve and stay ahead of the curve, and as an athlete that is something I truly respect. Although football is my world, poker has always been my game. I’m very excited to join the team. I started playing poker a few years ago, and I love the competition, strategy and fun. I’m looking forward to taking my game to the online and live poker tables and meeting my fans head to head.