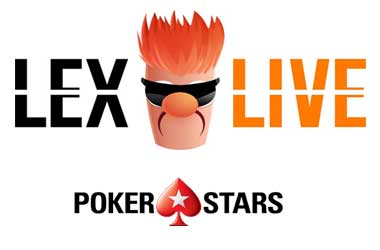 Team PokerStars Pro Lex Veldhuis will soon see his Twitch fans temporarily get off the internet and gather together in one location to take part in a live poker tournament.

Veldhuis will be happy to see his personal brand get so much attention as he will have his very own live poker festival take place in Belgium.

PokerStars will sponsor the first ever ‘Lex Live Spring Festival‘ which will be held at the Grand Casino De Namur, Belgium. Taking place from March 27 – 31, the tournament will showcase a number of events, which include turbos, hyper turbos, PLO and a two-day High Roller.

Veldhuis is a popular figure on the Twitch streaming platform with thousands of followers. His Twitch stream has attracted more than 17 million views to date.

The highlight of the festival is the much-anticipated €100,000 guaranteed Main Event which comes with a buy-in of €225. It has four starting flights, kicking off on the first day of the tournament on March 27.

The first three flights will have a 30-minute clock, with the final flight adopting a turbo blind structure played in 15-minute levels. Day 2 (March 30) and Day 3 (March 31, final day) each have 45-minute levels.

Sharing his excitement for his inaugural live event, Veldhuis said his growing Twitch community has always held on to the idea of having an event where everyone could just meet and hang out. The Dutchman is thankful that the Lex Live festival has finally come to fruition which he said will strengthen the relationships among his Twitch followers.

On top of the live poker action, players will also get to enjoy several non-poker activities throughout the five-day festival. They will be able to hang out at the bar, with some cool twists and exciting surprises in store for everyone. One can expect a relaxed environment which will have a community feel. Fans will also get the opportunity to battle Veldhuis on the live felt.