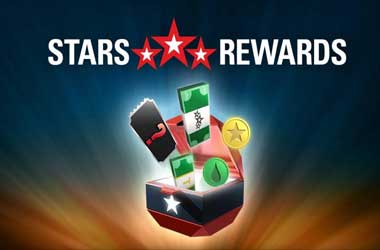 PokerStars has introduced new changes to its Stars Rewards program which it says will make it easier to earn rewards tailored to each player.

The changes apply to a number of major markets, which include the online poker giant’s global client, as well as the segregated markets in Europe.

Reward Points earned by players will still serve as the main basis for opening chests which contain cash prizes of between $0.50 and $700. There are six different levels of chests currently available, and while the prizes in the chests have been increased, players will now find it more difficult to reach every level as they need to earn 350 points to open the lowest level which is the Blue chest.

Prior to the changes, only 150 points were required to open the lowest chest represented by the Red level. It has been removed from the program, alongside the Platinum chest. They have now been replaced by the Diamond and Black chests.

The chest levels are labelled as follows, with their corresponding values:

The point requirements for the other levels have not been released, though parent company, the Stars Group hinted that players may need to earn three times more, according to their profile. There is also a significant increase in the payout frequency for the highest prizes, previously from 1 in every 10,000 chests to 1 in 100 chests.

The duration in which players climb to the next level has also been changed. Players will no longer have to earn four chests in one day to move up a level; they will instead make some progress after earning 10 chests over a 28-day period.

Certain chests will also reward players with a ticket to a special Stars Reward Spin and Go tournament where they’ll have the chance to win as much as $5,000. These tournaments are exclusive to those who have won their way to the contest via a rewards chest.

While it remains to be seen whether the revamp will go well with the poker community, Severin Rasset, PokerStars’ Director of Poker Innovation and Operations said the changes have been made in proportion to the manner by which players engage with The Stars Group’s poker, casino and sports products.