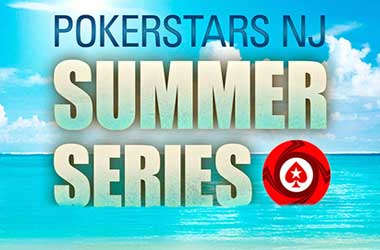 The 2019 PokerStars New Jersey Summer Series kicked off over the weekend.

The third edition of the tournament features a guaranteed prize pool of $300,000, running from July 28-August 4. A total of 17 events will take place for the duration of the series, with buy-ins ranging from $25 to $750.

Only one event will be played as Pot Limit Omaha, with the rest of the events to be played as No Limit Hold’em. Players can choose from a variety of formats including 4-max, knockouts, deepstacks, hyper-turbo, and rebuy.

Guarantees between $7000 and $75,000 are up for grabs at the Summer Series and players will compete for an average guarantee of $17,647 for each event. While this is a lot lower than the figure recorded in 2018 ($25,000), this year’s edition gives players more chances of winning with five more events being added to the schedule.

Among the main highlights of the tournament is the $750 High Roller which takes place on July 31, with the series culminating in the $400 buy-in Main Event on August 4, offering $75,000 in guarantees.

PokerStars New Jersey is giving players the chance to win their way to the Main Event at a much cheaper price through a special Spin & Go which requires only $2.50 to enter. Low-cost satellites have also started running.

Second Chance freerolls worth $1500 each will also be running from July 29 to August 3, awarding winners with more than $10,000 worth of free tickets to Summer Series events.

The Summer Series marks PokerStars fourth online tournament series in the Garden State. In January, the operator ran the Winter Series, offering total guarantees of $300,000, spread across 15 events. Players competed for an average guarantee of $20,000 per event. This was followed by the Turbo Series which took place in February, featuring 28 events and a total prize pool of $200,000. The average guarantee offered for each event was $7,143.

In May, PokerStars kicked off NJSCOOP, its flagship tournament series, which boasted 82 events, and awarded more than $1 million to the winner. More than $12,000 in average guarantee was up for grabs in each event. Do check out the PokerStars New Jersey website for more info.