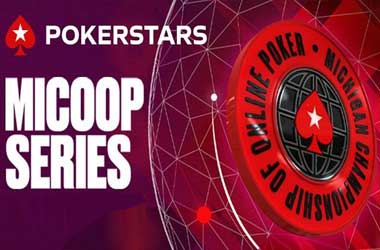 PokerStars is keeping its tradition of setting new records whenever it enters a new US market. After raising the bar in Pennsylvania, the world’s largest online poker site is now making some noise in the Great Lake State following the massive success of the first-ever Michigan Championship of Online Poker (MICOOP).

Being the only operator to have launched in Michigan, PokerStars wasted no time in taking advantage of its online poker monopoly in the state.

Just weeks after PokerStars MI dealt the first virtual cards on January 29, it received an overwhelming response from local players. That early success prompted the site to bring one of its most popular tournament series to the Great Lake State.

MICOOP took place from February 20 to March 8, and ended up attracting more than 28,800 entries to award a huge $2.2 million in total prize pool, more than double its initial guarantee of $1 million.

The series featured a total of 60 tournaments, and 56 of them managed to surpass their respective guarantees. The massive turnout resulted in many of the events awarding six-figure prize pools.

While the inaugural MICOOP was expected to generate significant interest considering that it was the first online tournament series to ever take place in the state, the overwhelming support shown by the poker community in Michigan indicates that the state’s online gaming market has huge potential.

Rebecca McAdam Willetts, PokerStars’ Associate Director of Consumer Engagement and Public Relations, said the recent MICOOP results are very encouraging, and it will serve as motivation for them to host more poker events in Michigan in the future.

MICOOP was able to exceed its New Jersey counterpart, with the latest edition of NJCOOP awarding just $1.1 million in total prize pool. NJ, which is home to around 8.8 million people, remains the biggest online poker market in the US, with multiple sites operating in the state.

Michigan, which has a bigger population than NJ, is the latest US state to launch a regulated online gaming market. PokerStars’ monopoly will end soon, with the entrance of other major operators such as WSOP.com, 888poker, and partypoker. This means that the online poker market in Michigan is poised for more growth and could soon dominate the US online poker market.