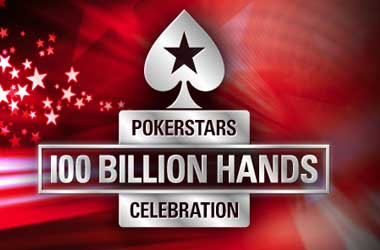 The team over at PokerStars are getting rather excited, as the time is about to come, sooner than later, when they mark that major achievement of dealing out their 100 billionth hand. As one of the most played at online poker sites it will come as no surprise to you when you learn they deal out huge numbers of hands of cards to their players daily, however they have big plans a foot to mark this up and coming hand.

They have put together a massive $5 million prize pool that has been set aside to give away to players at various stages up until the point in time when that mega hand is dealt out to one lucky player, and this money has been allocated to a plethora of special poker games.

Throughout June they are planning special a Golden Sit n Go promotion whereby massive cash prizes are on offer, to complement this they are also running a $1million prize pool Zoom Fast Fold promotion, plus some huge paying freeroll poker tournaments, those too have a $1million set of cash prizes up for grabs.

A special Guinnesss World Record event is being pencilled in for June 16th onwards, this is another poker tournament with a nominal $1 buy in, the aim of this is to have the most players online and playing at any one time via this tournament, and with a whopping $300k up for grab in cash prizes there are of course plenty of reasons to take part!

Those Golden Sit n Go Tournament we mentioned are due to start on June17th and are running through until June 23rd, the way the extra cash prizes are offered is by Poker Stars boosting the payouts as found in the prize pool by a massive ten time their usual values, meaning massive value and winninrg opportunities are on offer to players.

The 100 Billionth poker hand is going to be celebrated by the player who is dealt that hand instantly being awarded a $100k cash prize, plus all other players sat at the table who have been dealt in when it has been dealt will be given a not so insignificant $10000 cash prize, plus these players will also be given a cash prize worth a huge $2000 for every single VIP Player Point that they managed to accumulate player real money poker at that particular poker table where that hand was dealt out based on their last fifty hands dealt at that table.